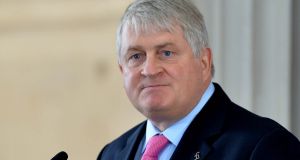 The Denis O’Brien-controlled company Communicorp operates the nationwide stations Newstalk and Today FM, along with a number of regional stations. Photograph: David Sleator

Communicorp, the Denis O’Brien-controlled radio group which owns the country’s only two national commercial broadcasters, has instructed its staff that no Irish Times journalists should appear on its programmes.

The decision was communicated to all programme-makers by the company’s chief executive, Adrian Serle, on Thursday morning.

In his memo to staff, Mr Serle wrote that the decision had been taken because of “vile comments” made by Irish Times columnist Fintan O’Toole in an article on September 12th during the controversy over opinions expressed by Newstalk presenter George Hook about rape and responsibility.

In his column, Mr O’Toole had described Newstalk as “the most flagrantly sexist public organisation” in Ireland and said it was time for “anyone with a conscience to stay out of its airspace”.

Delighted to see that Denis O'Brien's Communicorp is upholding free speech by banning all Irish Times journalists from all stations.

1/2 On @NewstalkFM last night, Ivan Yates asked me about the importance of freedom of expression in this hyper-sensitive media age...

2/2 This morning I was turned away from a pre-booked interview on @spin1038 because I write for the same newspaper as @fotoole.

I should add, though, that all of the people I know who work in Marconi House are deeply embarrassed by this business.

On September 16th, in response to a request for a right to reply to O’Toole from Newstalk managing editor Patricia Monahan, The Irish Times published an article in which she described the original article as “a disgrace” and “outrageously unfair” to the station’s staff.

There was no further communication between Communicorp and The Irish Times on the issue until Tuesday of this week, when the newspaper received a letter from Mr Serle, demanding that “a full and unqualified retraction and apology” be published in the following day’s newspaper and online. “If such an apology is not forthcoming then we will review our relationship with the Irish Times,” he wrote.

In his memo to staff, Mr Serle informed them that The Irish Times had refused his demand for an apology. “We asked for the apology to be printed by the end of yesterday,” he wrote. “This deadline has now passed.”

Irish Times editor Paul O’Neill confirmed he had been informed of Communicorp’s decision, but he said there were no grounds for an apology or for the retraction of the original column, which had also been sought. “Fintan was entitled to express his opinion and The Irish Times was entitled to publish it,” he said.

Mr O’Neill pointed out that Ms Monahan had been given the opportunity promptly to respond to the original column. Her article “fully reflected the views of Newstalk staff and was published on the basis that it would conclude the matter”, he said. “Communicorp has chosen to raise it again almost three weeks later.”

“It is a matter for Communicorp to decide who participates in its programmes,” Mr O’Neill added. “Equally, The Irish Times reserves the right to publish a wide range of opinion without fear or favour. We will continue to do so.”

Labour leader Brendan Howlin expressed his concern at Communicorp’s decision and said his party would raise the matter with the Broadcasting Authority of Ireland (BAI). “Banning journalists because of criticism is why people worry about media concentration,” he tweeted.

1 Should my mam wait for house prices to drop before buying?
2 Two prominent business leaders in planning row with neighbour
3 Cheers: Conor McGregor's whiskey races up the sales chart
4 ‘I’m so lucky to be in the Caribbean – a million miles from Derry Girls’
5 Joint accounts: if one of us dies, can the other access the money?
6 Global stocks climb near three-month highs as rebound hopes grow
7 Chris Johns: Past is another country when it comes to our post-pandemic future
8 Citigroup warns that markets are out of step with reality
9 If you injure yourself working from home, is your employer responsible?
10 Coronavirus: Big majority ‘uncomfortable’ returning to everyday activities
Real news has value SUBSCRIBE