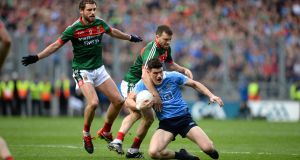 The live GAA experience should be sold to a ‘nontraditional’ audience in Britain, the British Irish Chamber of Commerce says

GAA matches should be marketed to British tourists as part of greater efforts to attract “culturally curious” visitors to Ireland, the British Irish Chamber of Commerce has urged.

The business group has published a new policy paper that also expresses support “in principle” for a Dublin city centre film studio and recommends that an additional €12 million be made available for tourism marketing in Budget 2018.

The chamber, which represents the interests of businesses with interests in both Britain and Ireland, said the Irish Film Board should have its annual budget restored to the pre-crash level of €20 million, while the Government should implement a five-year funding plan for the cash-strapped arts sector.

Ireland had “far more to offer” tourists by way of culture and sport, but tourists are sometimes already departing before they realise this, said the chamber’s director-general, John McGrane.

“The culture side of Irish life often tends to be seen as a ‘nice to have’, without regard for the fact that it is a significant part of society and the economy,” he said. “We understand the economics of tourism and we believe it is important to have a full regard to what contributes to it.

“When there is an All-Ireland weekend, for example, the whole sector should be incentivised to work together, so people who come to Ireland for one reason stay for another.”

The report recommends that “a concentrated effort” should be made to bring British citizens to Ireland for a GAA sporting weekend. It said Sky Sports coverage had exposed a wider British audience to the GAA and “the next logical step” would be to push the “live” experience to a “nontraditional”, GAA-curious audience.

“There is significant capacity to attract British and other tourists to Ireland for a high-level GAA match such as the Leinster final or the All-Ireland quarter final, which tend not to sell out,” the report notes.

The Government should adopt a unified approach to boosting the intertwined culture, arts, sport and tourism sectors at a time when visitors from Britain are under pressure as a result of a weak sterling.

The “culturally curious” have been identified as an important segment of the market by tourism agencies for several years, as these visitors typically stay longer and spend more than others. But the sector currently operates on “very little resources”, Mr McGrane said. “They’re not able to collaborate with others in the way that they could.”

The British Irish Chamber’s backing for a city centre film studio follows a decision by Dublin City Council to enable the use of Dublin Port land for “film, TV and digital content production studios” in the new Poolbeg Strategic Development Zone. Dublin Bay Studios, headed by Windmill Lane Studios founder James Morris and film producer Alan Moloney, had lobbied the council for inclusion in the zone.

“We really want to see the Dublin city centre film studio brought forward,” Mr McGrane said. “What has been done in Belfast with Game of Thrones and the wider production sector can be done here.”

However, the first priority of next week’s budget should be “don’t do any damage”, he said. This means keeping the 9 per cent tourism VAT rate in place.

1 Aldi empire wracked by family feud
2 TikTok to be banned from US app stores from Sunday
3 NatWest considers closing Ulster Bank in the Republic
4 Ulster Bank CEO tells staff ‘all options’ on future on the table
5 Cliff Taylor: What permanently low interest rates mean for you as a saver or borrower
6 How Ireland managed to green the White House
7 Mark Paul: Government faces dilemma on which businesses to save
8 Volkswagen close to selling its Bugatti supercar brand
9 Dublin-based Fenergo considers $1.5bn listing
10 Gabriel Makhlouf: ‘A full second lockdown would be very serious for the economy’
Real news has value SUBSCRIBE

Volkswagen close to selling its Bugatti supercar brand 14:12
CaixaBank and Bankia strike deal to create Spain’s biggest lender 13:39
TikTok to be banned from US app stores from Sunday 12:53
China’s currency on course for best week in 10 months 12:32
Ulster Bank CEO tells staff ‘all options’ on future on the table 12:00
Search executive
jobs on irishtimes.com