Seamus Dooley: a case of ‘cutting off your nose to spite your face’ 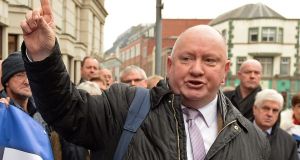 NUJ general secretary for Ireland Seamus Dooley said there was a serious problem with media ownership in Ireland.

The National Union of Journalists (NUJ) has described the decision by Communicorp to ban Irish Times journalists from its radio programmes, as “bizarre”.

Communicorp, the Denis O’Brien-controlled radio group which owns the country’s only two national commercial broadcasters Newstalk and Today FM, on Thursday instructed its staff that no Irish Times journalists should appear on its programmes

In a memo to staff, the company’s chief executive, Adrian Serle, said the decision had been taken because of “vile comments” made by Irish Times columnist Fintan O’Toole in an article on September 12th during the controversy over opinions expressed by Newstalk presenter George Hook about rape and responsibility.

On Friday morning the NUJ’s general secretary for Ireland Seamus Dooley described this as a case of “cutting off your nose to spite your face”.

He said there was a serious problem with media ownership in Ireland and said the decision would have implications for news plurality, he told RTÉ’s Today with Sean O’Rourke show.

The Communicorp decision was “mean and vindictive” and a “hissy fit” that was not going to have much of an impact on Irish Times journalists, he suggested.

The Irish Times provided a valuable service to Newstalk, Mr Dooley said, but added he would not be losing sleep about Irish Times journalists not being on Newstalk. “Fintan O’Toole will be fine.”

He said the wider issue was it was wrong that two national radio stations were owned by one company.

“What we have here is a decision because someone didn’t like what someone said. It is important because it says much about the ownership and management.”

Delighted to see that Denis O'Brien's Communicorp is upholding free speech by banning all Irish Times journalists from all stations.

1/2 On @NewstalkFM last night, Ivan Yates asked me about the importance of freedom of expression in this hyper-sensitive media age...

2/2 This morning I was turned away from a pre-booked interview on @spin1038 because I write for the same newspaper as @fotoole.

I should add, though, that all of the people I know who work in Marconi House are deeply embarrassed by this business.

This decision should be remembered when radio licences come up for renewal. “It is important that the issue of concern about ownership should be raised.”

Mr Dooley also pointed out that Denis O’Brien owned shares in the print media and that overall, the media industry in Ireland “is broken”.

Mr Dooley said The Irish Times had responded responsibly when initially approached and had given a right of reply to Newstalk who provided “a robust defence”.

“I think Irish Times readers and Newstalk listeners will be wondering why three weeks later this is resurfacing.

“At the end of the day, Newstalk has the editorial freedom to decide who to bring on air. But there is a question about the thought behind that decision and the importance of media inclusivity.”

Mr Dooley expressed concern about the lack of diversity in the media. “The more voices and the more sources the better.”

In his memo to staff yesterday explaining the move, Mr Serle wrote the decision had been taken because of “vile comments” made by Irish Times columnist Fintan O’Toole in an article on September 12th during the controversy over opinions expressed by Newstalk presenter George Hook about rape and responsibility.

In his column, Mr O’Toole had described Newstalk as “the most flagrantly sexist public organisation” in Ireland and said it was time for “anyone with a conscience to stay out of its airspace”.

On September 16th, in response to a request for a right to reply to O’Toole from Newstalk managing editor Patricia Monahan, The Irish Times published an article in which she described the original article as “a disgrace” and “outrageously unfair” to the station’s staff.

There was no further communication between Communicorp and The Irish Times on the issue until Tuesday of this week, when the newspaper received a letter from Mr Serle, demanding that “a full and unqualified retraction and apology” be published in the following day’s newspaper and online.

“If such an apology is not forthcoming then we will review our relationship with The Irish Times,” he wrote.

In his memo to staff, Mr Serle informed them that The Irish Times had refused his demand for an apology. “We asked for the apology to be printed by the end of yesterday,” he wrote. “This deadline has now passed.”

Irish Times Editor Paul O’Neill confirmed he had been informed of Communicorp’s decision, but he said there were no grounds for an apology or for the retraction of the original column, which had also been sought. “Fintan was entitled to express his opinion and The Irish Times was entitled to publish it,” he said.

Mr O’Neill pointed out that Ms Monahan had been given the opportunity promptly to respond to the original column. Her article “fully reflected the views of Newstalk staff and was published on the basis that it would conclude the matter”, he said. “Communicorp has chosen to raise it again almost three weeks later.”

“It is a matter for Communicorp to decide who participates in its programmes,” Mr O’Neill added. “Equally, The Irish Times reserves the right to publish a wide range of opinion without fear or favour. We will continue to do so.”

Labour leader Brendan Howlin expressed his concern at Communicorp’s decision and said his party would raise the matter with the Broadcasting Authority of Ireland (BAI). “Banning journalists because of criticism is why people worry about media concentration,” he tweeted.