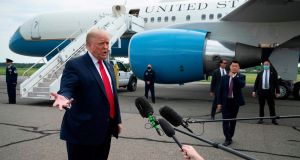 US president Donald Trump speaks to the press on arrival in Morristown, New Jersey, on Friday. Photograph: Jim Watson/AFP

Now that the grim festival of presidential re-election tactics are fully under way, it seems the right time to take a depressed squint at how the US media climate has deteriorated in the four years since a man was photographed wearing a T-shirt reading “Rope. Tree. Journalist. Some Assembly Required” at a Donald Trump rally.

At this late point in the 2016 campaign, Trump was still only the Republican presidential nominee and there existed a grand theory that he was staging an elaborate, already out-of-hand publicity push for the news empire he planned to launch once he lost. Halcyon days.

Just days later, he was elected – despite, ahem, receiving endorsements from just two of the top 100 US newspapers by circulation – and by the weekend Facebook chief executive Mark Zuckerberg was decrying the allegation that fake news spread via his platform had influenced the election. “A pretty crazy idea,” he insisted – a statement that, like Facebook’s algorithm, has not aged well.

By January 2017, Meryl Streep was standing up at the Golden Globes and inviting Hollywood to join her in supporting the Committee to Protect Journalists (CPJ), because journalists had become “one of the most vilified segments in American society right now”.

“The news is fake because so much of the news is fake,” was Trump’s take at an early press conference filled with what he called “dishonest people”. The delegitimisation of journalism was well under way, the tone set. Trump, it was clear, was interested only in his own view of the world.

Even when US journalists dropped obsequious formalities and interrogated their way to real blows, the post-truth quicksand erased their impact, the news cycle grinding along to Trump’s next ha-ha-WTF tweet.

Since then the carpet bag of anti-media tricks has included (but not been limited to): refusing to answer questions he doesn’t like, temporarily banning those news organisations (CNN, the New York Times, the BBC) he doesn’t like, declining to hold traditional press briefings for months, vowing to tighten federal libel laws that don’t exist, and recycling abusive tags such as “corrupt”, “phony” and “nasty”.

Retweet a cartoon of a CNN reporter being hit by a train? For Trump this wasn’t controversial, it was on brand – little wonder that one of the busy categories monitored by the CPJ’s US press freedom tracker is “chilling statements”, defined as “selected public threats” made to reporters and media outlets by US politicians and other public figures that serve to have a chilling effect on journalism.

That this has happened at the same time as private equity interests have gutted many US newsrooms of their reporting resources is bleak indeed. But even some employees of Rupert Murdoch’s prosperous Fox News have seemed rather down about the barrage from on high: veteran Fox host Chris Wallace, a known ranks-breaker at the Trump-friendly network, lambasted the president last December for engaging in “the most direct assault on freedom of the press in our history”.

As the US entered its election year, the first-amendment right to free speech wasn’t looking too hot.

Other categories in the CPJ’s US press freedom tracker notably include physical attacks, surveillance orders, journalist arrests and charges, equipment searches and seizures, equipment damage and denial of access. On the first of these alone, the CPJ has counted 241 cases of journalists being physically attacked in the US since 2017, with half of those attacks occurring this year.

As with the broader onslaught of US police violence against Black Lives Matters protestors, the presence of cameras seemed to make little difference to the treatment meted out. But cameras have amplified certain, telling incidents.

In May, CNN correspondent Omar Jimenez and two CNN crew were arrested in Minneapolis while they were live on air. Everybody, including Jimenez’s mother and grandmother, witnessed him showing his CNN badge, identifying himself as a reporter and assuring that they would move back “to where you like”, only for officers to handcuff him and lead him away. “I’ve never seen anything like this,” said CNN’s John Berman to co-anchor Alisyn Camerota, both in a state of disbelief as the camera winds up on the ground.

Within days, Australian prime minister Scott Morrison was calling for an investigation into an incident, filmed from multiple angles, in which Channel 7 correspondent Amelia Brace and cameraman Tim Myers were left bruised by surging Washington riot police.

In the frantic sequence, also broadcast live, Brace goes missing from the screen.“You heard us tell them that we are media, but they don’t care,” she says when she reappears, a truncheon in the back later. “They are indiscriminate at the moment.”

For sure, recognition of the role of a free press in a democracy can no longer be taken for granted in a country where democracy itself is in crisis. Withdrawal of that recognition is, of course, a standard means of undercutting democracy in the first place, though the easy harnessing of lie-disseminating Facebook and extraordinary hindering of the US Postal Service shows that the White House has others.

Yesterday, Trump was at it again, telling Fox and Friends that the “corrupt media” was his biggest opponent. It would be nice to think that such statements were dismissible aural wallpaper now that it is 77 days to go to the election, but the looming lesson from democratically-challenged countries is that things can get always get worse. By Christmas, Americans might find out how much worse.

1 Admission of mistake in Oxford vaccine dose raises doubts over reliability
2 Intel takes centre stage for Gaga’s Grammy tribute to Bowie
3 Move to EU or face disruption, City of London is warned
4 Cliff Taylor: Deal or no deal we are now heading for a hard Brexit
5 State may face €1bn in compensation in Covid-19 case, Press Up claims
6 Karlin Lillington: How I managed to cut my mobile phone bill by at least half
7 Longboat Clinical acquired in multimillion euro deal
8 Fiona Reddan: Who’s afraid of Revolut? Not AIB and BOI it seems
9 Foxconn to shift some Apple production to Vietnam to minimise China risk
10 Apple’s cash mountain, how it avoids tax, and the Irish link
Real news has value SUBSCRIBE