Sponsors have it in their power to prevent ‘creative flight’ 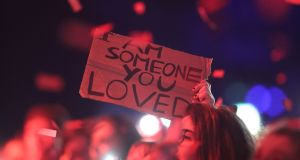 The crowd at the 3Arena for a Lewis Capaldi concert in March, one of the last events to take place at the venue before Covid-19 forced the industry to shut down. Photograph: Nick Bradshaw

It was one of those Waterford Whispers News headlines that was so sharp you could cut diamonds with it and still have a functioning blade. “Culture Night: Nation Given Final Chance to Say Goodbye to Arts Industry,” it read on Friday, accompanied by a streaky, arty photograph of a dance ensemble in happier times.

Coinciding with the Government announcement that Dublin would be placed under Level 3-and-a-bit restrictions, the “ouch” was visceral with this one, and the underlying sympathy of the satirists clear. On Culture Night the city was the urban equivalent of broadcasting static, with little evidence of any night-time economy at all.

By Saturday one cinema was reminding its lost patrons that even if they couldn’t watch a film, they could still drop in before 5pm and buy a bucket of warm popcorn. The pathos was unreal.

A crisis can focus the most pragmatic of minds, and for sure it has never been more apparent that Government policy on culture demands a rethink. That, in case you hadn’t interpreted it, is journalist code for “I’m hazy about the precise remedies, but I’m pretty certain something needs to be done, and soon”.

The point has already been well made that both Ireland’s arts practitioners and the diverse hinterland of people who until recently earned their living from the commercial entertainment sector – plus the individuals and organisations with a foot in each of these overlapping camps – need urgent public assistance to get them to the other side of the pandemic.

Without it the cultural industries will be at high risk of languishing in the doldrums, stricken for a Covid-outlasting period by what the National Campaign for the Arts calls “creative flight”.

The newly formed Event Production Industry Covid-19 (EPIC) working group last Wednesday advanced its #ThisIsWhoWeAre campaign, imploring lovers of gigs, theatre and festivals to contact their TDs and urge them to back the sort of Government supports that will ensure there is still an events industry “when this is all over”.

Speaking on behalf of lighting designers, sound technicians, caterers, special effects experts and thousands of events crew with no opportunity to trade for months on end, the campaign seemed to achieve a decent level of visibility before being drowned out by the onset of second-wave fears. Recent public health setbacks, in prolonging its misery, should only further illuminate the cause of the industry that was first to close and, as it understands only too well, will be the last to reopen.

One of EPIC’s pre-budget submission asks is that the Government’s new Arts and Culture Recovery Taskforce become “a long-standing body”, and indeed it just might have to be. “Identifying ways of preserving and re-establishing this once-vibrant, heart-warming and magical sector will be a mammoth task,” according to Catherine Martin, the Minister for Media, Tourism, Arts, Culture, Sport and the Gaeltacht, hinting there at the perceived challenge of actually implementing any of its future recommendations.

Having already confirmed former RTÉ radio boss Clare Duignan (a non-executive director of The Irish Times) as its chairwoman, the Minister has since issued a list of the organisations and interest groups that will be participating in the taskforce (alongside musicians Denise Chaila and Martin Hayes).

Two in particular caught my eye. The first was the Events Industry Alliance (EIA), which comprises sub-groups like EPIC and associations you never imagined existed, such as the Irish Inflatable Hirers Federation. The Minister reported having “a very useful and informative meeting” with the EIA earlier this month, roughly 24 hours after the EIA had issued a blunt statement expressing deep frustration that “the primarily non-funded sector” that sells “90 per cent of the tickets” had been left out of a key virtual meeting attended by arts organisations.

Its voice is important to hear, and not only because the fixes required at the commercial end of the spectrum will differ from those at the grant-dependent end. Conversations purely about the “arts” can sometimes seem like valiant attempts to press the case for subsidised Vogon poetry without ever appealing to, say, the teenager who has tickets for Camila Cabello at the 3Arena.

This is why another notable inclusion on Martin’s taskforce is Business to Arts, an organisation that “builds creative partnerships between arts and business” and rewards these links with a feedback loop of lovely publicity through its annual Business to Arts Awards.

When safety allows the live events industry to begin again, there will be no shortage of venues, performances and festivals in need of corporate cash to keep the curtain up

An example of what it does arrived this Monday when it launched a partnership with Bank of Ireland on a €1 million all-island fund open to artists and arts projects either responding to Covid-19 or adapting to cope with it. The sums involved per applicant are €3,000 to €10,000 (or the sterling equivalent), and there are some other conditions attached.

So a much-welcomed scheme for a Monday morning, then, but there is undoubtedly a lot more that can be done by financial companies, telecoms groups, alcohol giants, car manufacturers and other big brands to which consumers give considerable chunks of their disposable income.

I’m still haunted by a sponsorship industry survey from four years back that, as an “area of opportunity”, ranked the entire Irish arts world on about the same level as a single sporting activity, Mixed Martial Arts, then heavily dependent on one man.

1 Hurrah for the companies giving staff more time off
2 RTÉ to seek 70 voluntary redundancies as ‘large costs’ beckon in 2021
3 Covid-19 will worsen shortage of accountants, says CPA Ireland
4 Some Irish money market funds came close to danger in March
5 Start-up Loanitt raises €570,000 as it looks to double headcount
6 Sustainable investment: How your pension can help tackle climate change
7 ‘We lost money on our planned wedding in Spain. Covid saw to that’
8 How to make the hybrid workforce model work
9 Policy failed us during the banking crisis and it’s failing us again
10 ‘Brexit readiness’ tool launched for Irish business amid trade talks impasse
Real news has value SUBSCRIBE