A year on from ‘inclusion rider’, Hollywood accepts 4% challenge 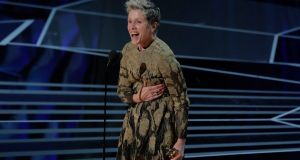 It’s been a year since Oscar viewers feverishly began Googling “inclusion rider” on their smartphones while watching the awards show.

Frances McDormand, who dropped the legal bombshell in her Oscar speech after winning the award for Best Actress, had only just heard the words herself. But “inclusion rider”, a provision in contracts that directs studios to hire more women and minorities, has quickly become a Hollywood byword.

The brainchild of Stacy Smith, an associate professor at the University of Southern California, the clauses have been added to contracts for films by Michael B. Jordan and another bought by Apple Inc.

Still, progress has been too slow and too spotty for Smith and many in Hollywood - even if many of this year’s best-picture nominees explore themes like race, class and sexual orientation.

The founder of USC’s Annenberg Inclusion Initiative, Smith is now helping spearhead a new campaign called the Four Percent Challenge - so named for the meagre share of movies directed by women.

“It’s impossible for these numbers not to move now,” Smith said in an interview. “The studios have the memo, and they are making changes.”

There’s a lot of catching up to do. Only once in Oscar history has a woman won best director, and only five have ever been nominated. At Sunday’s 91st Oscars, women will once again be absent from the category. Nor is there a female-directed movie up for best picture, despite many critically acclaimed films this year.

Debra Granik, who propelled Jennifer Lawrence to fame in Winter’s Bone and directed last year’s Leave No Trace, described the lack of recognition as more than a snub in an interview with IndieWire.

“I think empirical exclusion is more of, I think, what we’re talking about,” she said.

Because of the Four Percent Challenge, studios such as AT&T Inc.’s Warner Bros and Comcast’s Universal Pictures are racing to get projects underway with women at the helm. Universal is already on schedule to meet a commitment to making three movies with female directors, one from each of its labels, over the next 18 months.

“We are seeing a groundswell, and that’s what’s going to move the numbers in the quickest fashion,” Smith said.

Smith has been monitoring employment patterns and diversity in Hollywood since the early 2000s and began “rolling out solutions” in 2014, according to her university webpage.

For the first time in more than a decade, the team at USC saw a rise in black directors for the 100 top-grossing films. The historically high figure of 16 last year compares with six in 2017 and is double the number working on top films in 2007, according to their report. Smith is confident 2020 will see progress for women and Asians as well.

On the acting front, USC’s Inclusion Initiative has also monitored progress. Among the top 100 films last year, a total of 40 featured a woman in leading, or co-leading roles. That up 8 percentage points from 2017, double the 2007 tally and the highest seen by USC over 12 years.

The inclusion rider was by drafted Smith; Kalpana Kotagal, a lawyer at Cohen Milstein; and Fanshen Cox DiGiovanni, an artist and educator who served as head of strategic outreach for Pearl Street Films, the production company of Matt Damon and Ben Affleck.

It is included in an actor or producer’s contract, for example, and requires that women and minorities be auditioned or interviewed for supporting roles or crew positions. It includes financial consequences for studios that don’t engage in “good faith.”

And it’s having an impact. Jordan, for example, committed to the rider for all projects produced by his Outlier Society and will release a picture next year with Warner Bros, Just Mercy, that was subject to the clause.

It’s the first production under a new initiative at the studio, which promised “best efforts” to ensure diverse actors and crew members are considered for film, television and other projects, according to a statement.

In Just Mercy, people of colour made up 70 per cent of the crew, according to co-star Alison Brie, who also committed to using the rider. In some cases, workers were flown into Atlanta to meet the quota they committed to, she told the Hollywood Reporter.

Minhal Baig - an American Muslim of Pakistani descent - wrote, produced and directed Hala, a coming-of-age tale based on her own life. The production of the film involved a inclusion rider, according to the producers.

That led to women obtaining three-fourths of the critical production roles -- as well as key positions like film editor, according to Jana Babatunde-Bey, an executive producer.

“That’s one of the roles that we looked out into the universe and said, ‘Well how we can bring a perspective that is diverse and inclusive to this very critical component of how the story finally winds up on the screen?’” Babatunde-Bey said.

Hala is due for release this year, according to IMDb. Baig, who is a story editor on Netflix’s BoJack Horseman, said she was in tears when she announced on Twitter that Apple had bought movie at the Sundance Film Festival. The picture is backed by Hollywood superagent Ari Emanuel’s Endeavor Content and Will Smith’s Overbrook Entertainment.

Growing demands for inclusion riders by major players in Hollywood and initiatives like the Four Percent Challenge suggest change is going to accelerate, behind the camera and onscreen, and mean more opportunity for groups that Hollywood studios have historically excluded.

“It’s about the larger landscape,” Babatunde-Bey said. “It’s about shifting the paradigm.” – Bloomberg.