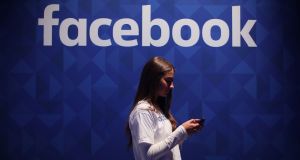 The US Federal Trade Commission is investigating whether Facebook broke a consent order that it signed with the commission in 2011. Photograph: Niall Carson/PA Wire

Facebook is in early talks with the US Federal Trade Commission over settling an investigation into privacy violations that could result in a record fine for the technology company, according to sources.

The US watchdog is investigating whether the social network broke a consent order that it signed with the FTC in 2011, which required it to be clear with users about how their data were being shared with third parties.

According to two people familiar with the talks, negotiations over a settlement have started although no monetary figure has been agreed.

The FTC opened its investigation into the social network’s privacy practices in March last year following the Cambridge Analytica scandal, in which the data of 87 million users was improperly accessed by a third party.

David Vladeck, a former FTC director who oversaw the 2011 agreement with Facebook, said he expected a major financial penalty. “I think it’s highly unlikely the FTC would impose a civil penalty under a billion dollars,” he said.

At the launch of the probe, Mr Vladeck had said each user whose data were misused could be counted as an individual violation. If the company was found to have broken the order, it could face fines of about $40,000 (€35,000) per violation.

This would mean a multibillion-dollar fine for Facebook, potentially surpassing the record $22.5 million fine paid by Google in 2012 for misrepresenting privacy assurances to certain users.

The discussions, which were first reported by the Washington Post, could still lead to litigation if the two sides cannot come to an agreement.

Facebook has been mired in a series of public scandals over its privacy practices. In December, the social network was criticised over the leak of user data to companies that integrate their services with Facebook, such as Microsoft and Spotify.

In some cases these third-party services continued to have access to the personal data related to Facebook users and their friends even after individual partnership agreements with the social network had expired.

Despite the scandals, Facebook reported last month a bumper fourth-quarter performance in 2018, with revenues of $16.9 billion, up 33 per cent year on year on a constant currency basis and well above analysts’ estimates.

Facebook declined to comment on the talks but pointed to a statement released by the company in July last year. “We are co-operating with officials in the US, UK and beyond. We’ve provided public testimony, answered questions and pledged to continue our assistance as their work continues,” the statement said.

The FTC declined to comment. – Copyright The Financial Times Limited 2019