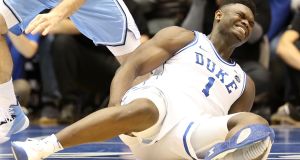 Shares of Nike fell nearly 2 per cent on Thursday, a day after a sports shoe worn by emerging basketball star Zion Williamson split in half 33 seconds into a hotly anticipated game between Duke University and North Carolina.

The freshman centre, who plays for the Duke Blue Devils, suffered a mild sprain to his right knee, according to his coach, Mike Krzyzewski.

Williamson did not return to play in the match-up, which ended with top-ranked Duke losing 72-88 to the No 8-ranked Tar Heels.

“We are obviously concerned and want to wish Zion a speedy recovery,” Nike said in a statement.

“The quality and performance of our products are of utmost importance. While this is an isolated occurrence, we are working to identify the issue.”

Williamson was wearing the Nike PG 2.5 basketball shoe when he was injured, according to ESPN. The line of sneakers are a product of a collaboration between the world’s largest sportswear company and six-time NBA All-Star Paul George, who plays for the Oklahoma City Thunder.

Nike shares were down about 1 per cent at $84.03 in early trading on the New York Stock Exchange, while its relatively thinly traded shares on the Frankfurt market fell about 1 per cent. Shares in rivals Adidas and Puma edged higher.

Nike is Duke’s exclusive supplier of uniforms, shoes and apparel under a 12-year contract that was extended in 2015 and has had an exclusive deal with the private university since 1992, ESPN reported.

“At this juncture we are optimistic that while negative headlines might weigh upon Nike shares for a bit, any lasting damage to the company and its shares will prove minimal,” Oppenheimer analyst Brian Nagel said in a note. – Reuters