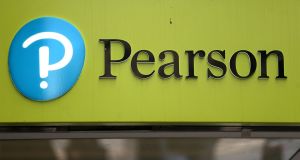 In recent years Pearson has sold assets including the Financial Times and a 50 per cent stake in the Economist to fund a move into ebooks, rental schemes and online courses. Photograph: Neil Hall/Reuters

Education company Pearson expects to grow sales in 2020 after more than five years of declines, calling a tipping point for a company that has been hammered by the sudden shift to digital learning.

Forced to cut thousands of jobs to shrink its cost base while investing in new digital platforms, the world’s biggest education provider said it expected sales to stabilise this year before rising in 2020 and beyond.

In 2018 it eked out profit growth by cutting costs but said it now expected investments in new technology platforms to help the group to produce top-line growth.

“We’re now at an increasingly exciting tipping point in the company,” John Fallon, the chief executive who has had to steer the group through one of the most turbulent periods in its 175-year history, said on Friday.

Pearson, which has in recent years sold assets including the Financial Times and a 50 per cent stake in the Economist to fund a move into ebooks, rental schemes and online courses, said the troubled parts of its portfolio were now shrinking and stabilising, while investment in growth areas was paying off.

It has found growth in providing online academic programmes and supporting virtual schools, used by home-schooled pupils or those who want to learn subjects not taught at school.

On Friday it said 2018 sales fell 1 per cent on an underlying basis to £4.1 billion while adjusted operating profit rose 8 per cent to £546 million. – Reuters