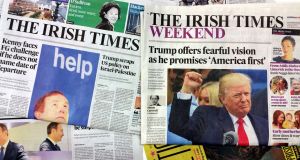 ‘The Irish Times’ has combined print and digital sales of 79,406 in the second half of 2018. Photograph: Frank Miller

The Irish Times had combined average daily sales of 79,406 copies for its print and ePaper editions in the second half of 2018, new figures from the Audit Bureau of Circulations (ABC) show.

This was 2 per cent up on the second half of 2017 as rising sales for the audited digital edition of The Irish Times exceeded the decline in print copies sold. It was the only newspaper of significant size to grow its circulation over the period.

The audited digital edition recorded daily sales of 21,275 for this period, up 26 per cent year on year. The figure includes only digital subscribers who receive the ePaper as part of their subscription.

The Irish Times now has more than 90,000 subscribers across its various print and online products, and has agreed a deal to offer the New York Times as part of a bundled offering for digital subscribers.

“We are delighted that our overall paying customer base is experiencing steady growth,” said Liam Kavanagh, managing director of The Irish Times. “As expected there has been some shift from print to digital sales and our overall ABC figure continues to be stable. On a daily basis, customers are signing up to our direct subscription services and this model, as well as the continued development of our home delivery services, enables us to build a strong direct relationship with our readers.”

The ABC report confirms that, while several titles have enjoyed sharp growth in their digital sales, the Irish print newspaper market has retreated once more, extending a trend that began 12 years ago.

The daily print market dropped 10 per cent year on year in the second half of 2018, while sales in the Sunday market fell 9 per cent.

The Irish Independent had a combined print and digital edition circulation of 87,512, down 6 per cent year on year.

These titles are not part of the ABC’s Island of Ireland report and only audited figures for the Republic are available.

Dublin title the Herald, published by Independent News & Media, had a circulation of 28,940, down 20 per cent year on year.

The Times Ireland had a print circulation of 6,730 in the period in the Republic, down 33 per cent year-on-year.

A combined print and digital figure is only available for The Irish Times, the Irish Independent, the Sunday Independent and the Sunday Business Post.

The circulation in the Republic of the Irish Sun on Sunday and the Irish Sunday Mirror both fell 8 per cent year on year to 49,116 and 20,249 respectively.