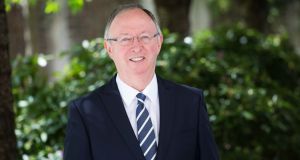 Harry Hughes, managing director of Portwest, said PPE sales normally represent 6 per cent of its annual sales, but this has jumped to 40 per cent in the midst of the global coronavirus epidemic. Photograph: Richie Stokes

Portwest, the Mayo-based safety equipment supplier group, had six containers of PPE (personal protective equipment) “seized” by the Chinese government in March, it said on Wednesday.

Harry Hughes, managing director of the family-controlled business, one of the most successful in the west of Ireland, with sales last year of €220 million, said he had “never seen anything like it”.

Mr Hughes told an online conference organised by PricewaterhouseCoopers that PPE sales normally represent 6 per cent of its annual sales, but this has jumped to 40 per cent in the midst of the global coronavirus epidemic.

He said in March, demand for PPE became intense, and that “all of a sudden, we were competing with governments” when sourcing goods through its normal supply chain. He said the six containers in China were “ready to go” when they were seized at the last minute by the government there.

He said there there was further “government intervention on the supply side” in the UK and also in Poland, which implemented an export ban on PPE.

The business normally targets sales growth of 20 per cent each year and its revenues were up 30 per cent in the first two weeks of March, before competition stiffened for stock in the rest of that month.

Its April sales were back down to 50 per cent of what it achieved last year before recovering this month to 100 per cent. With demand for PPE now such a huge part of its business, Mr Hughes said it was forced to close off its online portal for customer orders due to excess demand.

Ms Sinnamon told the conference that EI export offices were reopening this week in Europe and also further afield, such as China. Mr McKeever highlighted that volumes on sea shipping routes out of the State were back up to about 75 per cent to Europe and slightly less to the UK, after falling as low as 25 per cent at one point.

Mr McKeever also said many exporters were now presuming that there will be a hard Brexit at the end of the year, when the transition period runs out. He said he is personally “utterly convinced” this will happen.

David McGee, PwC’s strategy partner who chaired the event, concluded by saying that “all three” of the speakers, including Ms Sinnamon, had “called a hard Brexit” and that this accorded with the “house view” inside PwC.