Pandemic will wipe out capital due to be returned to shareholders 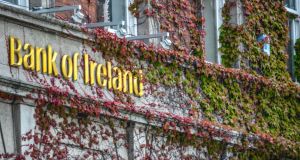 Bank of Ireland has to rebuild its capital levels to its medium-term targets, which may see it delay returning to regular dividend payments to 2023, analysts said. File photograph: iStock

Bank of Ireland, AIB and Permanent TSB face having to deal with more than €4 billion of bad loan losses stemming from the Covid-19 crisis over the course of three years, according to analysts at Goodbody Stockbrokers and Davy.

While all three lenders, in which the State retains major stakes following bailouts during the last financial crisis, are forecast to post net losses this year as they take a hit from coronavirus, their capital levels will remain above regulatory requirements, according to new reports by both brokerages.

Still, Goodbody Stockbrokers said the effects of the pandemic will wipe out excess capital that had been earmarked for return to shareholders. AIB, of which Irish taxpayers own 71 per cent, was estimated to have had €3 billion of surplus funds at the time of its initial public offering (IPO) three years ago, though this had fallen to about €1 billion by the end of last year as banks dealt with the earnings squeeze from ultra-low interest rates and muted loan growth.

Bank of Ireland also has to rebuild its capital levels to its medium-term targets, which may see it delay returning to regular dividend payments to 2023, the analysts said.

“Covid-19 presents indiscriminate threats and shrouds the outlook with uncertainty. Yet Irish banks face the pandemic from positions of capital, funding and liquidity strength. The phased reopening of the economy is progressing successfully thus far, but further supports, particularly for businesses, will be required to ensure losses are limited and the economy is rebooted from its period of hibernation.”

Many economists globally consider the coronavirus pandemic to be a greater financial shock than the financial crisis that started in 2008. However, Goodbody analysts Eamonn Hughes and Barry Egan estimate that non-performing loans (NPLs) in AIB will peak at 11.3 per cent of total loans this time around, compared with 35 per cent following the financial crash.

Bank of Ireland’s NPLs should peak at 7 per cent, compared with 18 per cent during the last crisis, they said.

The analysts give a number of reasons to support this view. Household debt has fallen to 116 per cent of disposable income from 200 per cent in 2017, while banks’ loans have fallen to 90 per cent of their deposit bases from 165 per cent. Banks now have a 15 per cent capital reserves ratio – known as common equity Tier 1 – to absorb shock losses, compared with one of 5.5 per cent in 2017, they added.

In addition, banks’ new lending levels are a fraction of pre-crash levels, driven by Central Bank mortgage rules and stricter general underwriting standards by a sector still scarred by the property market implosion, they said.

“Clearly the last financial downturn was catastrophic for Ireland, resulting in the nationalisation of a large part of the banking system, stemming from a run up in leverage in the mid-2000s – across funding and capital and significant exposure to the real estate sector, particularly commercial,” the Goodbody analysts said.

Irish banking stocks have fallen about 70 per cent so far this year, compared with a 40 per cent decline by the broader European banking sector, partly dragged down by investors’ memories of the last crisis.

In addition, the Government’s total €14 billion of health spending, income supports, and business loan guarantees and investments unveiled in the past three months in response to the pandemic amounts to less than 7 per cent of the size of the underlying economy, compared with averages of 10-12 per cent across EU peers, the analysts said.

The State’s banks are beginning to write to tens of thousands of borrowers who have availed of payment breaks during the Covid-19 crisis, urging those who feel they will not be able to return to regular payments after a six-month pause to engage on finding longer-term solutions.