Christine Lagarde says estimates for milder slump ‘out of date’ 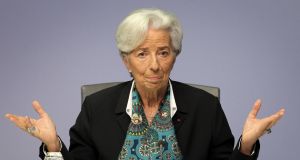 “We’ll have a better sense in a few days as we publish our numbers in early June, but it’s likely we will be in between the medium and severe scenarios,” Christine Lagarde said. Photograph: AFP via Getty

The euro-area economy is faring worse than hoped, facing a recession as bad as the European Central Bank’s more pessimistic forecasts, according to president Christine Lagarde.

Output in the region is set to shrink between 8 per cent and 12 per cent, she said, with estimates for a milder slump now “out of date”. Her remarks highlight the severity of the repercussions for Europe after many businesses were forced to close because of the coronavirus pandemic, costing hundreds of thousands of jobs and furloughing millions more.

Both the central bank and governments have ramped up spending to offer companies and households support, with the European Commission due to announce plans for a region-wide support package later on Wednesday.

“We’ll have a better sense in a few days as we publish our numbers in early June, but it’s likely we will be in between the medium and severe scenarios,” Ms Lagarde said of the outlook in an online question-and-answer session. ECB vice president Luis De Guindos reiterated her assessment later on Wednesday.

The ECB is set to update its official projections for growth and inflation next week, when the Governing Council also decides on policy.

In March, the central bank launched a €750 billion emergency asset-purchase programme, which might be increased at next week’s meeting.

Executive board member Isabel Schnabel said in an interview with the Financial Times that policymakers are ready to expand any of its instruments if incoming data shows a need.

“With respect to the Pandemic Emergency Purchase Programme, this concerns the size but also the composition and the duration of the programme,” she said.

ECB bond-buying has helped rein in borrowing costs and made it easier for governments to fund stimulus.

Ms Lagarde expressed confidence that higher public spending won’t result in a new debt crisis in the euro area. Debt-servicing costs are “extremely low,” she said, adding that if economies are transformed to be made more efficient, productive and sustainable, then spending should be encouraged.

“All countries around the world had to respond, and as a result of that had to increase their debt,” she said. In the face of the pandemic, “use of debt is not only recommended, it’s the way to go.”

In the virtual event, which was targeted at European youth, Ms Lagarde also answered a question about what advice she would give young people embarking on their careers in such challenging times.

She encouraged viewers to embrace the “beauty of the course of changes we are seeing” by acquiring new skills and being “prepared to do all sorts of jobs”.– Bloomberg