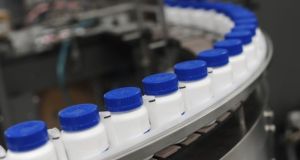 Regeneron continues to expand in Limerick with construction ongoing for a new laboratory and office building.

Regeneron, a biopharma giant that employs 1,000 people in Limerick, is to create 60 more jobs.

The company, which has an industrial operations and product supply facility at the Raheen Industrial Estate, is working on a Covid-19 antibody cocktail known as Regn-Cov2. Clinical trials are due to commence next month.

Regeneron acquired the former Dell computer facility in Limerick and secured planning approval in April 2014 for its first facility outside of the United States. Over the last six years, the company has invested more than $1 billion to build what is believed to be the largest biologics manufacturing facility in the Republic.

The company said it continues to expand locally with construction ongoing for a new laboratory and office building.

“It feels surreal to now have over 1,000 of the most talented people in the industry working at our Raheen site. At the time we decided to set up shop in Limerick, I didn’t fully appreciate the depth of the Irish talent pool or how welcoming the community would be,” said Daniel van Plew, executive vice-president and general manager. “It is a privilege to continue to work and grow in Limerick, and to be surrounded by so many hardworking and innovative people.”

Regeneron, which employs more than 8,000 people in total, reported revenues of $7.86 billion last year. The last publicly available accounts for its Irish unit show it reported pretax profits of $386.47 million on revenues of $1.87 billion in 2018.