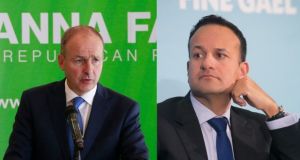 Ireland’s incoming government faces having to push through almost €11 billion of spending cuts and tax increases in the coming years to rein in a yawning budget deficit resulting from coronavirus, according to the Irish Fiscal and Advisory Council.

The austerity drive could balloon to €15 billion – half the amount endured during the financial crisis years – in a worst-case scenario where the economy is stricken with more coronavirus lockdowns.

The budgetary watchdog says the State will need a credible stimulus package to rebuild the economy – possibly as much as €10 billion.

That is in addition to €14 billion in additional health spending, income supports and business loan guarantees and investments that have been unveiled by the Government in the past three months.

“The next government will have to make some important and difficult decisions about competing spending and tax objectives,” Sebastian Barnes, the acting chairman of the council, told reporters ahead of the launch of a new report on the State’s finances today.

“Still, it should be possible to avoid a severe austerity this time around, and that’s both because the scale of the adjustment is half, even in the most severe case, and also because the background is different.

“This adjustment should be able to take place in a situation where the economy is growing, rather than contracting, in a much more favourable environment in terms of [low government borrowing] rates.”

Deficit reduction has emerged as a major issue to be resolved in government formation talks. Fine Gael’s Paschal Donohoe and Fianna Fáil’s Michael McGrath said in a session yesterday that a signal will have to be sent that the deficit must be cut, even if there is borrowing and economic stimulus. Neasa Hourigan, the Green Party’s finance spokeswoman, suggested debt reduction could mean austerity and cuts. The three will meet again today.

While the Government forecast last month that the economy – measured as gross domestic product – would contract by 10.5 per cent this year before rebounding by 6 per cent in 2021, the fiscal council has built its projections out to 2025.