Values slide as Brexit and US data stoke fears of slowdown 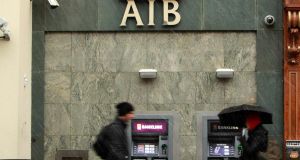 Shares slid on Friday as Brexit and poor economic data from the United States and Europe stoked fears of a slow down.

Leading Irish shares were weak on what traders said was a generally volatile day with little stock-specific news.

Investors walked away from Irish banks. AIB tumbled 2.18 per cent to €3.772, while Bank of Ireland slid 2.42 per cent to €5.24. Dealers suggested ongoing uncertainty about Brexit was behind the fall.

Global building materials giant and index heavy weight, CRH, shed 1.59 per cent to €27.19. Traders said the move was on the back of more general concerns about economic performance in its key markets, including the US and EU.

Insulation and building materials specialist Kingspan had a similarly tough day, falling 2.8 per cent to €40.22.

Cardboard box maker Smurfit Kappa ended the day almost 3 per cent off at €25.52, but actually hit a low of €25.26 as investors avoided the global packaging industry.

Debenhams was effectively wiped out after the struggling department store chain told shareholders that some of its restructuring options could leave them with nothing.

The group, which has already lost 90 per cent of its value and is trying to fend off a bid from from Mike Ashley’s Sports Direct, is seeking €234 million in extra cash from lenders.

Its shares plunged 45.17 per cent to 1.59p sterling in London on Friday after the company warned that some of the options it intended pursuing to secure its future would “result in no equity value” for shareholders.

Packager and Smurfit Kappa rival DS Smith fell 4.17 per cent to 342.3p as investors swerved the sector. Mondi, another London-listed Smurfit peer, was down 3.75 per cent at 1,709p.

The globally-focused FTSE-100 index was down 2 per cent and the more UK-exposed FTSE 250 was off 1.8 per cent as the pound strengthened following an EU decision to give British prime minister Theresa May two extra weeks Brexit breathing space to April 12th.

Education publisher Pearson was one of the few bright spots, adding 1.68 per cent to 849.2p after analysts at JP Morgan upgraded the stock’s rating and predicted its shift to digital would bring long-term growth.

Irish builders’ supplier, and owner of Woodies DIY chain, Grafton slipped 1.35 per cent to 803p. The group is headquartered here but is listed on the London Stock Exchange.

Wall Street’s main indexes tumbled about 2 per cent after a raft of weak manufacturing data from the United States and Europe fed fears of a slowdown. Surveys showed trade tensions hit factory output earlier this month.

Financial stocks took the biggest hit, tumbling 2.94 per cent, the most among the 11 main S&P sectors. The banking sector plunged 4 per cent.

Chipmakers, which get a huge chunk of their revenue from China, fell. The Philadelphia chip index was down 2.29 per cent, while the broader technology sector declined 1.64 per cent.