Sterling fell 1% against the euro on the day 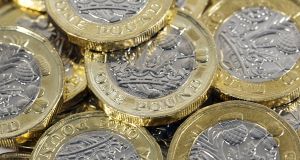 Sterling fell sharply on Wednesday after British prime minister Theresa May asked the European Union to delay Brexit until June 30th and Brussels immediately pushed back.

Ms May’s request for a three-month extension is shorter than some in the market had been expecting and the prime minister said a no-deal Brexit was still possible.

British media reported that Ms May could make a statement later on Wednesday and parliament was set to hold an emergency debate.

With no consensus in Britain’s parliament over how to leave the EU, Ms May was forced to seek an extension from the EU beyond the scheduled departure date of March 29th.

She said she wanted an orderly departure from the EU and planned to bring her twice-defeated divorce deal back to the British parliament.

Markets have largely priced out the chances of a no-deal Brexit but uncertainty about how and when Britain will leave the EU have kept sterling traders on edge.

A European Commission document seen by Reuters said the Brexit delay should either be several weeks shorter, to avoid a clash with European elections in May, or extend at least until the end of the year, which would oblige Britain to take part in the elections.

The pound dropped to as low as $1.3147 as investors worried about the EU opposing May’s extension request. It fell nearly one per cent on the day before recovering to around $1.3190.

It had been trading around $1.3220 before Ms May addressed parliament, having rallied to a 9-month high of nearly $1.34 last week.

The extension, which will need approval from EU member states, leaves the Brexit divorce uncertain, with options including leaving with Ms May’s deal, a longer delay, a disruptive exit or even another referendum.

Viraj Patel, an analyst at financial advisory Arkera, said the best hope for sterling “is that May’s deal gets over the line” as it would lower uncertainty.

Market volatility gauges in the pound remained firm even as other gauges, such as one-month euro volatility indexes, fell.

“Until some clarity emerges, we do not advocate taking directional views on sterling and advise hedging downside risks, but we note that sterling has tended to react positively to events that point to a substantial delay,” UBS strategists said.

British government bond yields also fell, with the 30-year gilt yield hitting its lowest since September 2017 after Ms May spoke to parliament.

Earlier, official data showed British inflation ticked up last month but stayed close to January’s two-year low. As with most economic data releases, the numbers had little impact on a pound preoccupied with Brexit headlines. – Reuters