Investors fret on US Fed policy decision and Brexit gloom

Iseq slips 0.6% on tense day for shares across Europe in response to Westminster turmoil 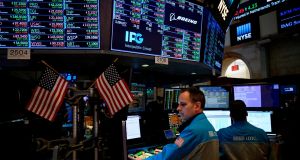 European markets were dragged down by negative corporate news as well as uncertainty as how the next stage of the UK’s Brexit process will unfold.

Investors also awaited the US Federal Reserve’s policy decision, in which it is expected to hold interest rates steady and shave the number of rate increases projected for the rest of the year.

The Iseq index fell 0.6 per cent on a jittery day for equities across Europe as investors responded to further political turmoil in Westminster. Bank stocks lost ground, with AIB down 3.6 per cent at €4.07 and Bank of Ireland finishing 2.5 per cent lower at €5.64.

The real estate investment trusts also declined, with Green Reit ending 1.7 per cent down at €1.50 and Hibernia Reit losing almost 1.5 per cent to close at €1.36. Hotel operator Dalata dropped 2.2 per cent to €5.74.

Ryanair continued its descent this week, losing almost 2.2 per cent to €11.76. Paper and packaging group Smurfit Kappa was one of the few stocks to finish with a green ticker, the company adding 2.5 per cent to close at €27.16. Building materials group CRH edged up 0.4 per cent to €27.82.

Financial stocks and housebuilders slipped after British prime minister Theresa May asked the EU to delay Brexit and caused the FTSE 100 to snap a seven-day winning streak, while a slide in sterling pulled the mid-cap index lower.

Home improvement retailer Kingfisher shed 6.4 per cent after it reported lower full-year results and said it had started the process to replace its chief executive.

Mid-cap satellite operator Inmarsat jumped 13.1 per cent after it confirmed takeover talks with a consortium that could take the company private for about $3.3 billion.

The pan-European Stoxx 600 index fell 0.9 per cent, with the decline led by the German stock market. The Dax fell 1.6 per cent, weighed down by a plummeting Bayer, while the French Cac-40 ended 0.8 per cent lower, breaking a seven-day winning streak.

Pharmaceutical and life sciences company Bayer slumped after a second major defeat in a US court over claims that its Roundup weed killer causes cancer. The legal woes Bayer inherited when it acquired Monsanto have hammered its share price, though it insists that the active ingredient in the herbicide is safe.

The stock traded 13 per cent lower at one point, and closed down 9.6 per cent.

It was also a bad day for BMW, which fell almost 5 per cent after signalling that earnings would fall.

Stocks dipped after Donald Trump said tariffs could be left on China for a long period of time, but pared some of the losses soon after.

FedEx dropped 5.5 per cent after the delivery company cut its 2019 profit forecast for the second time on slowing global trade growth.

Higher oil prices kept energy stocks afloat while gains in Facebook and Alphabet buoyed the communication services sector. General Mills jumped 3.8 per cent, the most on the S&P, after the Cheerios cereal maker raised its full-year forecast. – Additional reporting: Reuters/Bloomberg.