US banks dampen a good week for equities 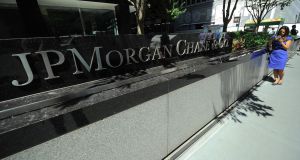 Disappointing forecasts from US banks JP Morgan Chase and Citigroup acted as a drag on markets on Friday dampening what had been a good week for equities.

Disappointing forecasts from US banks JP Morgan Chase and Citigroup acted as a drag on markets on Friday dampening what had been a good week for equities.

The week was the strongest week since May as investors returned to equities on indications that central banks are unlikely to raise interest rates as quickly as some feared.

The Irish market performed in line with Europe on day that dealers said was quiet. AIB dipped 0.3 per cent to €5.01, but traders maintained that the recently refloated bank was “still the belle of the ball”, with markets keeping a close eye on what is likely to be the next stage for its shares. The lender held between the €5.00 and €5.03 marks all week.

In UK stocks, Royal Mail shares tumbled 10 pence sterling or 2.34 per cent to to 401p following news that its workers will vote on proposals to reform the company’s defined benefit pension scheme, which the company had planned to close next year, amid hopes of averting strike action.

EasyJet edged higher, by 2p to 1,411p, amid news that the carrier has applied for a new new air operator’s certificate in Austria that will allow it to continue flying in the European Union after Brexit.

Dixons Carphone fell 1.7 per cent to 260p after the company said it was selling its Spanish operations for €55 million with proceeds set to be reinvested into the business.

Carillion shares made marginal gains after losing nearly two thirds of its market value earlier this week. The troubled construction and infrastructure giant rose 0.7p to 56.15p, having announced it had drafted in HSBC as an adviser as the company embarks on a comprehensive review of its operations.

Anglo American benefitted as miners rose, adding 2.09 per cent to close at 1,117p. Penney’s parent Associated British Foods was down 2.06 per cent at 2,855p.

Swedish building group Skanska fell 6.15 per cent to 193.80 kroner after warning that a fall in the value of some US and UK civil engineering projects would hit second quarter profits.

Skanska said it was booking writedowns of 420 million Swedish crowns in its US civil operations business and a writedown of 360 million on British projects.

After the writedowns, it expected operating income to fall to about 1.5 billion crowns from 1.7 billion a year earlier.

Finnish steel maker Outokumpu climbed 4.81 per cent to €7.42 as its sector gained ground on news that US president, Donal Trump, indicated that he was considering quotas and tariffs on Chinese steel dumping.

Analysts at Barclays said they remained positive on the European mining sector, which has gained just 4 per cent so far this year after rallying more than 60 per cent in 2016.

Other Nordic stocks were also in focus as Norwegian insurer Gjensidige slumped 6.5 per cent to the bottom of the STOXX 600 after its second quarter results came in below forecasts.

US stocks were trading at record levels early Friday afternoon as weak economic data dimmed chances of another rate hike this year and tech stocks gained.

However, tepid forecasts by JPMorgan and Wells Fargo capped gains. Shares of JPMorgan fell 1.5 per cent, Citigroup was down 1 percent and Wells Fargo fell 1.9 percent, despite their quarterly profits beating analysts’ expectations.