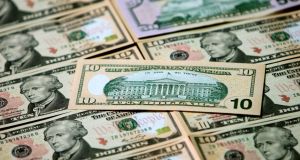 Dollar was 0.2 per cent higher against the euro and the basket of currencies used to measure its broader strength

The dollar recovered some ground on Monday, as a rise in US government bond yields to their highest in seven weeks helped halt a run of losses that added up to the currency’s worst quarter since 2010.

Signs of shift towards policy tightening last week from central bank officials outside the United States drove the euro above $1.14 to its highest in over a year, but the central support of higher market interest rates continues to favour the greenback.

“The reason why US yields have gone up is important: they have been following European yields higher in the past week,” said Sam Lynton-Brown, a strategist with BNP Paribas in London.

“What that tells you is that dollar yen is the safest dollar long and dollar yen is near the highs. Our base case remains that US data rebounds sufficiently to allow the market to price in more [tightening] from the Fed than it does currently.”

In a session set to be quietened by the absence of many traders before the US July 4th holiday, the dollar was 0.2 per cent higher against the euro and the basket of currencies used to measure its broader strength.

It gained 0.4 per cent to 112.82 yen but with oil prices almost 1 per cent higher, was slightly less robust against the bloc of major currencies seen as closely linked to commodities prices.

The Canadian dollar was holding onto gains that took it past $1.30 per US dollar, emboldened by growing bets in the market for a rise in interest rates by the Bank of Canada next week.

Canadian bank RBC was the latest to flip last week in favour of a rate rise and the bank’s analysts said on Monday the next targets for the loonie technically were below $1.29.

“The recent break below strong congestive support at 1.3000 exposes 1.2823 and 1.2764 as the next supports of note for USD/CAD on the downside, with a return above 1.3186 required to negate the current downtrend,” they said.

All eyes on Tuesday will be on the Reserve Bank of Australia for signs of it joining the hawkish chorus among major central banks. Any shift in the wording of the bank’s statement might support the Aussie, which was just under 0.2 per cent off last week’s highs on Monday.