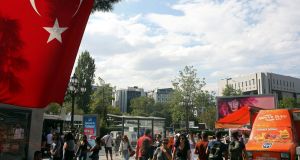 A Turkish national flag hangs above retail kiosks on a street in Ankara. The yield on the country’s benchmark bond briefly touched a historic high of more than 20 per cent on Tuesday.

Turkey’s bonds and currency came under intense pressure on Tuesday as investors fretted about a breakdown in relations with the United States and political constraints preventing the central bank from shoring up confidence in the economy.

The Turkish government said it was sending officials to Washington to defuse the rift, but a lack of detail about what they would propose unnerved the markets. The yield on the country’s benchmark bond briefly touched a historic high of more than 20 per cent and the lira failed to bounce back strongly from an all-time low the previous day.

Investors have signalled increasing concern over the stewardship of the economy under President Recep Tayyip Erdogan, particularly after the Trump administration last week imposed sanctions on Ankara, its long-time Nato partner.

Turkish media said the two countries had reached a “preliminary understanding” over sanctions the US imposed in response to the detention of American pastor Andrew Brunson in Turkey on espionage and terrorism charges.

CNN Turk, a local broadcaster, said Mevlut Cavusoglu, Turkey’s foreign minister, had spoken with Mike Pompeo, US secretary of state, ahead of the delegation’s trip. Ankara said the group, reported to be led by Sedat Onal, the deputy foreign minister, would meet US officials on Wednesday.

But Soner Cagaptay, a Turkey expert at the Washington Institute for Near East Policy, cautioned: “As far as Washington is concerned, the time for negotiations has passed. They want Brunson and other citizens released yesterday.”

Both Mr Trump and Mike Pence, his vice-president, have taken a hard line on the dispute, partly because of pressure from evangelical supporters.

Nevertheless the US embassy in Ankara said on Tuesday that “despite the current tensions, the US continues to be a strong friend and ally of Turkey”.

While Washington is pushing hard for the release of Mr Brunson, Ankara wants the US to return Mehmet Hakan Atilla, an executive at Halkbank, a state-run lender who was sentenced to 32 months in prison this year for helping Iran evade a US embargo.

Turkey also hopes the US treasury will go easy on Halkbank, which faces penalties for sanctions-busting.

Aaron Stein, an analyst at the Atlantic Council think-tank, said Turkey had misread the US mood by reneging on a previous deal.

“They made a bet that they could have a personal relationship with Donald Trump but then double crossed Donald Trump,” said Mr Stein. “They really painted themselves into a corner.”

By mid-afternoon on Tuesday, the Turkish lira stood at TL5.2450 to the dollar, compared with its record low of TL5.425 the day before. The currency has lost about 28 per cent of its value against the greenback since the end of last year.

A note by Goldman Sachs warned that further lira depreciation could hit the health of Turkey’s banks, which were previously well capitalised.

In another sign of rising investor concern, a measure of the cost to insure Turkey’s debt against default hit its highest level on a closing basis since 2009. The five-year credit default swap spread reached 348 basis points on Tuesday, up significantly from 166bp at the end of last year, according to data from IHS Markit. – Copyright The Financial Times Limited 2018