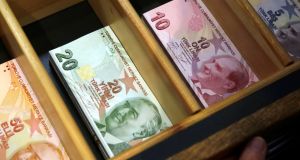 Global bank stocks suffered as the Turkish lira crisis shook investor confidence in lenders exposed to the country while, in the US, Apple and Amazon hit record highs, offsetting declines in the shares of lenders.

On a day the Iseq outperformed European peers, the pound neared a 13-month low amid uncertainty as to whether the UK will secure a trade deal with the EU.

The Iseq improved by 0.07 per cent on the first day of the trading week, buoyed by Ryanair’s reversal in fortunes.

As mediation got under way to avoid further strike action at the budget airline, Ryanair’s stock advanced 3.04 per cent to €13.37, bringing the company to the top of the smaller Iseq 20 index.

The beleaguered Irish-Swiss baking company Aryzta fell 11.73 per cent to €7.15 – a one-year low – on its Dublin listing on Monday after announcing a rights issue. The company intends to raise up to €800 million of equity capital as it looks to restructure and pay down debt.

On the same day that Ulster Bank announced the sale of a €1.4 billion portfolio of distressed mortgage assets to US fund Cerberus, both AIB and Bank of Ireland lost ground, falling 0.3 per cent to €5 and 1.45 per cent to €7.48 respectively.

Mincon Group advanced 4.78 per cent to €1.71 on the day after announcing a strong set of results, albeit on light volume.

Elsewhere, it was a mixed day for equity housebuilders, with Glenveagh falling 0.54 per cent to €1.114 after concluding a €213 million share placing, and Cairn Homes advancing 1.26 per cent to €1.608.

The pound traded near 13-month lows as investors bet on continued dollar strength and uncertainty over whether Britain would secure a trade deal with the European Union before it exits the bloc. Sterling lost almost 2 per cent of its value last week because of growing unease among investors that Britain was headed for a future without an established relationship with its largest trading partner, the EU.

British shares dipped on Monday as the Turkish currency crisis continued to shake global markets, with stock indexes declining from Asia to Europe.

European travel stocks were hard hit, with TUI posting the worst performance of the British blue chip index, with a 2.49 per cent fall. Thomas Cook also lost 2.90 per cent but EasyJet advanced 0.10 per cent.

Chemring Group also suffered a steep fall, down 12.29 per cent after an explosion at a factory left one person dead on Friday.

The pan-European STOXX 600 fell 0.2 per cent and closed at a three-week low, with Germany’s DAX down 0.4 per cent as pharmaceuticals group Bayer weighed.

Bayer was the worst performer, sinking 10.8 per cent after Monsanto, the US agriculture giant it acquired in June, was ordered to pay damages in a lawsuit alleging its glyphosate weedkiller caused a man’s cancer.

Euro zone bank stocks fell 1.8 per cent and touched levels not seen since December 2016 during trading. Turkish-exposed banks BBVA, Unicredit and BNP Paribas fell 3.2 per cent, 2.6 per cent and 1.1 per cent respectively.

Air France KLM shares tumbled 4.1 per cent after its biggest pilots’ union said over the weekend further strikes were possible if pay talks with management did not resume.

The financials slipped as US bank stocks, like their European counterparts, bore the brunt of investor worries over exposure to Turkey’s crisis. Shares of Citigroup, Bank of America, Wells Fargo and JP Morgan were down between 0.3 per cent and 0.5 per cent.