Markets report: Apple and Amazon reach record highs as do S&P 500 and Nasdaq 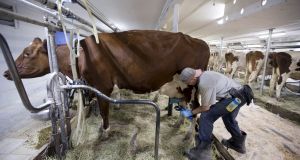 Optimism over trade talks between the US and Canada boosted the S&P 500 and the Nasdaq to all-time highs on Wednesday. Photograph: Christinne Muschi/Reuters

Optimism over trade talks between the United States and Canada boosted the S&P 500 and the Nasdaq to all-time highs for the fourth session in a row on Wednesday. Amazon and Apple also reached fresh record highs on the day.

Ireland’s benchmark index slightly outperformed European markets while the UK’s top share index slid, under pressure from a bounce in sterling on the back of remarks from the European Union’s chief negotiator Michel Barnier, who offered Britain close ties after Brexit.

Ireland’s benchmark index traded broadly in line with European markets on Wednesday, rising 0.63 per cent, with gains for index heavyweight CRH and Ryanair. The budget airline rose 0.5 per cent to €14.42, outperforming peers IAG and EasyJet, after its subsidiary airline LaudaMotion announced plans to double its fleet.

Meanwhile, building giant CRH rose 1.8 per cent to €29.1965 after announcing that it was beginning the second tranche of its share buy back programme.

After flagging that it would have to recognise €3.4 billion of additional risk-weighted assets as part of a review of euro zone banks’ models by the European Central Bank, Permanent TSB dipped 2.33 per cent to €2.10. Bank of Ireland was flat on the day while AIB advanced 0.83 per cent to €4.88.

Smurfit Kappa dropped 0.22 per cent to €36 after confirming that its Venezuelan arm was taken over by the government amid complaints about prices the company was charging for products.

Finally, in advance of its results on Thursday morning, Total Produce fell 2.35 per cent to €2.08.

Stocks in the consumer staples sector came under particular pressure, with shares in British American Tobacco and Diageo down 1.4 per cent and 0.4 per cent respectively.

Shares in UK-listed oil and gas firms took the most points off the index, with BP and Royal Dutch Shell both down around 1 per cent.

The UK’s mid cap index was also subdued, trading 0.5 per cent lower. In a sign of confidence, however, luxury carmaker Aston Martin set out plans to float on the London Stock Exchange, hoping to complete an initial public offering of at least a quarter of its shares this year.

The STOXX 600 index ended the session up 0.3 per cent, despite caution among some market watchers, given the ongoing trade tensions between the US and China.

Germany’s RTL gained more than 2 per cent after reporting forecast-beating growth in second quarter revenues and core earnings. Shares in Spanish retailer Inditex, however, dropped 5.7 per cent after Morgan Stanley rated the Zara owner “underweight” for the first time.

France’s Ingenico was also under pressure, losing more than 6 per cent.

Micro Focus, the British software company, added 2.9 per cent after it started a share buy-back programme. Among small caps, Sinclair Pharma surged around 35 per cent after agreeing to an offer from China’s Huadoing.

Morgan Stanley raised its price target on Amazon and Google-parent Alphabet, becoming the most bullish Wall Street brokerage on the so-called FANG members, causing the stocks to rise by 2.3 per cent and 1.3 per cent.

Dick’s Sporting Goods tumbled 5.5 per cent as the sportswear retailer’s quarterly same-store sales fell more than expected. The company blamed tighter controls on gun sales and weak sales of Under Armour products, which pushed shares of the sportswear maker down nearly 1 per cent.

In a weak day for retailers, department store chains Macy’s, Kohl’s and Nordstrom fell more than 2 per cent while Tiffany’s dropped 4.9 per cent. – Additional reporting: Reuters

1 HSBC board rethinks overhaul and seeks even deeper cuts
2 ‘Over 1,000’ pubs have interest in Covid-19 insurance test case
3 A Smigin of language goes a long way for well-travelled Cork woman
4 Denis O’Brien forced to lift hood on Digicel in debt restructuring
5 Player Wills site: Hines and APG to seek permission for 416 homes
6 Huawei asks Samsung and SK Hynix for chip supplies in face of US isolation
7 How to . . . move (almost) everything to your new phone
8 Fruit and vegetable firm obtains interim court orders against technical manager
9 Ryanair goes to court over conduct of social welfare appeal
10 Pilita Clark: A lot of us are losing it in lockdown – but we really shouldn’t
Real news has value SUBSCRIBE