Shares rise, but investments in food delivery business continues to weigh on profits 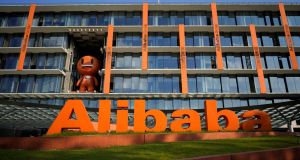 The company said it had formed a holding company for local services and food delivery firms Ele.me and Koubei, for which it had received over $3 billion in new investment commitments, including from SoftBank Group and Alibaba itself.

Alibaba’s US-listed shares rose about 4 per cent in pre-market trade, as investors reacted positively to the better-than-expected revenue growth.

Revenue rose 61 per cent to 80.9 billion yuan (€10 billion) in the April-June period, compared with analysts’ average estimate of 80.7 billion yuan, according to Thomson Reuters I/B/E/S.

Net income attributable to shareholders, however, fell 41 per cent to 8.7 billion yuan, or 3.3 yuan per share, partially due to one-off costs related to share-based compensation following a fundraising round by Ant Financial, Alibaba’s payment affiliate.

While revenue growth has accelerated since Alibaba’s 2014 stock exchange listing, costly investment in offline retail, logistics and cloud computing has squeezed profit margins – which, for Alibaba, are typically well above 20 per cent.

In April-June, Alibaba’s gross margin was 11 per cent versus 29.2 per cent a year earlier, its lowest margin since listing.

Going forward, executives said profits would continue to be impacted by investments in new businesses, partly due to the consolidation of Koubei and expenses related to its newly-created local services unit.

“This investment into the local services area, combined with the consolidation of Koubei . . . will result in slower overall gross profit in near term,” said Alibaba chief financial officer Maggie Wu, on a call with analysts.

The local services business is one of several large investments the company has made in recent months.

Analysts are confident in Alibaba’s ability to monetise its investments but expect slim profit margins for the time being.

“To build up the new assets, the company is likely to finance that with some of the profit from other assets as well as its balance sheet. As a result, we may see margin pressure in the near term,” analyst Tian Hou at TH Data Capital said in a pre-earnings research note.