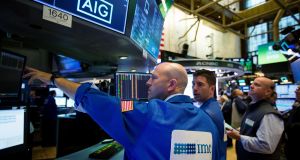 The benchmark S&P 500 and the Nasdaq hit all-time highs on Friday after Federal Reserve chair Jerome Powell said the central bank’s current approach to interest rate hikes were the best way to protect the US economic recovery. Photograph: Michael Nagle/Bloomberg

The benchmark S&P 500 and the Nasdaq hit all-time highs after Mr Powell’s comments at an annual meeting of central bankers did little to change market expectations of an interest rate hike in September and perhaps again in December.

The dollar weakened as Mr Powell, speaking in Jackson Hole, Wyoming, said a gradual approach of raising rates remains appropriate to protect the US economy and keep job growth as strong as possible with inflation under control.

The Iseq closed up 1.2 per cent at 6,799, driven in the main by insulation manufacturer Kingspan, the standout performer of the day. The Cavan-based group saw its shares rise 9.5 per cent to €42.48 following better-than-expected half-year results showing company revenue at €2 billion for the period for the first time. One trader said the firm was about 5 per cent ahead of where the market thought it was.

Britain’s major stock index rose on Friday, propped up by Shire and commodity sectors as investors digested a speech by the US Fed chief and the lack of a breakthrough in US-China trade talks. After a sluggish start to the session the index climbed and ended with a gain of 0.2 per cent at 7,577.49 points, with Shire and Antofagasta among the top gainers.

The FTSE inched to a 0.3 per cent weekly rise in a week the British government set out plans for a possible no-deal Brexit and sterling hovered near 11-month lows against the euro. Oil majors Royal Dutch Shell and BP both gained around 1 per cent after a Norwegian government-appointed commission ruled Norway’s sovereign wealth fund should stay invested in energy stocks. Shire shares were up 2 per cent after the US Food and Drug Administration approved a first-of-its-kind drug, Takhzyro, to treat patients suffering from a rare hereditary disease.

Housebuilders Persimmon, Berkeley, Barratt Development and Taylor Wimpey were among the worst-performing after data showed mortgage approvals fell in July despite appetite for remortgaging ahead of an expected Bank of England rate rise.

European shares were little changed on Friday as investors digested the latest round of US-China trade talks, which ended without a breakthrough but left open the hope of eventual progress. Autos rose 0.3 per cent, after being among the worst-performing sectors earlier in the week since a surprise profit warning from tyre-maker Continental, which added to ongoing tariff concerns. Basic materials rose 0.6 per cent as London copper prices rose. Antofagasta was a top gainer, rising 2.2 per cent.

The benchmark S&P 500 and the Nasdaq hit all-time highs on Friday after Federal Reserve chair Jerome Powell said the central bank’s current approach to interest rate hikes were the best way to protect the US economic recovery. Gradual rake hikes are also the best way to keep job growth as strong as possible and inflation under control, Mr Powell said.

The rate-sensitive utilities sector fell 0.16 per cent and the consumer staples index 0.20 per cent. Staples were hit by Philip Morris’s 3.3 per cent drop and Altria’s 2 per cent drop after brokerage Jefferies flagged concerns that the two tobacco companies could lose market share. Netflix rose 3.6 per cent after SunTrust Robinson Humphrey upgraded the stock to “buy”, saying current-quarter subscriber growth was solidly in line or ahead of estimates. Autodesk leaped 14.7 per cent, the most on the S&P, after the software maker’s quarterly results beat estimates. Gap sank 11.8 per cent and Foot Locker tumbled 11.7 per cent after the retailers posted disappointing same-store sales.

Commercial vacancy rates increased in all provinces last year 04:00
Solar panels: How do they work - and are they worth it? 03:45
US stocks have worst day in two years as coronavirus fears spread 21:22
Some €436bn wiped off European stocks as coronavirus fears increase 20:40
Profits fall at production company behind Brendan O’Connor’s Cutting Edge show 19:45