Shares surge on the prospect of north American trade deal 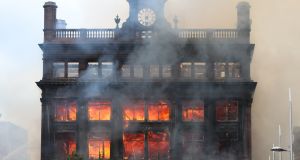 European shares surged to a two-week high on the back of news of a US-Mexico trade deal on Tuesday.

Index heavyweight, CRH, a cement and building materials manufacturer, fell 1.61 per cent to €28.68 following news of the US trade deal with Mexico. About half the Irish group’s turnover comes from the US. More than 1.13 million of its shares changed hands in Dublin yesterday.

Travel software developer Datalex climbed 1.7 per cent to €2.39 after reporting that profits soared 25 per cent in the first half of the year to €1.7 million. Investors bought 1.5 million of its shares in Dublin yesterday.

House builder Glenveagh Properties fell 1.12 per cent to €1.06 after about 3.6 million of its shares changed hands.

Low-cost carrier Ryanair advanced 2.14 per cent to €14.35. The airline said it had signed a collective labour agreement with Italian pilot union Anpac. The news helped steady investor nerves over recent industrial unrest at the company.

Penneys owner Associated British Foods slid 3 per cent to 2,286p sterling after fire engulfed the Bank Buildings, home to its Belfast store, destroying the historic structure. The group had recently refurbished the outlet.

Irish building materials group CRH was down 1.3 per cent at 2,607p in London, where it has its main listing.

Shares in struggling estate agent Countrywide tumbled 10 per cent to 13.4p despite investors backing a £140 million emergency fund-raising to keep the group afloat and pay off some of its £200 million debt.

Outsourcing and distribution business saw its stock dip 5p to 2,325p despite reporting an 8 per cent increase in profits, and that it had bought Norway’s Enor, which supplies catering equipment to hotels, restaurants and fast food chains.

Miners boosted the London market. Anglo American was among the day’s best performers, gaining 3.24 per cent to 1,626p.

European autos rose 0.8 per cent after the US and Mexico agreed to overhaul the North American Free Trade Agreement (Nafta). That put pressure on Canada to agree to new terms on auto trade and dispute settlement.

Among individual stocks, shares in Danish brewer Royal Unibrew rose 4.8 per cent after the company raised its outlook for the third time this year.

Autos stocks were boosted not only by the Nafta deal but also a note from Credit Suisse analysts arguing the sector could re-rate from “trough” levels and upgrading Renault.

Auto parts supplier Faurecia also got a boost from broker Kepler Cheuvreux raising the stock to “buy” from “hold”.

South Africa-exposed stocks Investec, Old Mutual and Anglo American all rose amid a rally in emerging market assets after the Nafta trade deal.

Italy’s Ftse MIB underperformed the market again as motorway operator Atlantia fell 3.2 per cent after the transport minister said the government would reject the firm’s plan to rebuild the collapsed motorway bridge in Genoa.

Luxury stocks LVMH and Richemont climbed 1.6 to 1.9 per cent after the Swiss competition authority WEKO declined to open a formal investigation into watchmakers over the supply of spare parts for independent watch repair shops.

Plastics manufacturer Covestro’s shares fell 3 per cent to the bottom of Germany’s Dax index after Barclays cut its price target on the stock by 11 per cent.

US stocks trod water on Tuesday, with the benchmark S&P 500 and the Nasdaq hovering at all-time highs, a day after the US and Mexico reached an agreement to overhaul Nafta.

The top gainer among the S&P sectors was real estate with a 0.56 per cent rise, and the biggest laggard was energy, which was down 0.38 per cent.

Coty rose 6.3 per cent, the most on the S&P, and Estée Lauder gained 1.2 per cent after Morgan Stanley upgraded the shares of the beauty products makers.

Xilinx gained 1.6 per cent after Baird upgraded the chipmaker’s shares on an expected ramp-up in 5G-related shipments later this year.

Campbell Soup dipped 1.2 per cent after a New York Post report that the soup maker does not plan to sell itself. – Additional reporting: Reuters