President ‘not thrilled’ with decision to raise interest rates 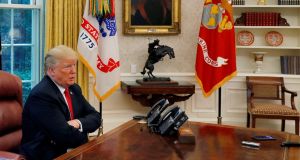 US president Donald Trump has been more vocal than his predecessors in commenting on the Fed’s monetary policy stance.

The dollar lost ground on Tuesday after US president Donald Trump’s latest broadside against the Federal Reserve.

The moves came after Mr Trump told Reuters he was “not thrilled” with Fed decisions this year to raise interest rates. He also accused China of “manipulating” its currency. “And I think the euro is being manipulated also,” he said.

Mr Trump has been more vocal than his predecessors in commenting on the Fed’s monetary policy stance – something that is usually taboo given the central bank’s independence. He criticised the Fed last month on similar grounds, raising concerns that higher rates made it more difficult to accelerate economic growth.

The president has also previously stated his preference for a weaker dollar, which makes US exports more competitive. The Fed’s rate tightening and expectations for further rate rises on the horizon has been a key factor in boosting the dollar this year. Expectations for further dollar strengthening have also increased in recent weeks.

“This is now a serious headwind to the dollar,” said Viraj Patel, strategist at ING, referring to Mr Trump’s comments.

“Maybe investors could have brushed off the first or second comment as off-the-cuff remarks, but constant jawboning is sending a clear message that this mercantilist administration has an implicit weak dollar policy – not least as this is required for consistency with its current US trade policy.”

Derek Halpenny, European head of markets research at MUFG, added that Mr Trump had “taken a leaf from the [Turkish] president Erdogan’s book by criticising the actions of the central bank in continuing to raise interest rates”.

Mr Halpenny’s comments were an allusion to the Turkish president who is a staunch critic of high interest rates, describing them at one point as “the mother of all evil”. The Turkish president has helped stoke an economic crisis by pushing for high growth without regard for the costs. – Copyright The Financial Times Limited 2018