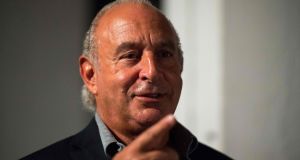 Arcadia’s Sir Philip Green: fears mount for the future of his Topshop to Burton and Miss Selfridge conglomerate and the 18,000 it employs. Photograph: Chris J Ratcliffe

Hosting a lavish Grand Prix party aboard his super-yacht in Monaco was probably not the most sensible move by Sir Philip Green at the weekend, as he battled to save his ailing high street empire.

Sensitivity never has been the retail tycoon’s strong point, however, so perhaps we should not be surprised. But as the champagne flowed aboard the good ship Lionheart, fears mounted for the future of his Topshop to Burton and Miss Selfridge retail conglomerate – and the 18,000 people it employs.

For months now, Green has been attempting to pull together a rescue plan for Arcadia. The value of the business has plummeted, stripping Green of his billionaire status, according to the Sunday Times Rich List, although his family wealth is still put at some £950 million (€1.08 billion).

Arcadia has been hit by the harsh trading environment, but is suffering additionally from years of underinvestment that have left Green’s retail chains unable to compete against rivals such as Primark and Asos.

Store closures are inevitable. Under the plan proposed by Green, about 50 outlets will be shuttered, with the loss of up to 1,000 jobs. Such is the state of the group, however, even that may not be enough to guarantee its future.

First the plan must be agreed by Arcadia’s creditors, and its landlords, who are being made to share the pain in the form of sizeable rent reductions. In return, they would be handed a 20 per cent stake in the business if it were to be sold.

Green’s Grand Prix party will not have gone unnoticed by the landlords, nor can they forget the record £1.2 billion dividend he extracted from the business 14 years ago. They don’t want the retailer to go under, but they object to funding Green’s lifestyle.

Even if the landlords take their haircut, approval is required from the pension trustees and the regulator. The scandal over the BHS pension shortfall has not been forgotten and the authorities are determined there will be no repetition.

Arcadia’s pension deficit could balloon to £750 million if the business were to collapse, but Green has proposed halving annual payments into the scheme to £25 million. The regulator has already made it clear it expects Green to inject more cash into the scheme if he wants those payments reduced.

Time is running out for Arcadia, which will put its plan to the vote at a meeting on June 5th. If it fails, administration looks inevitable. And even if the plan is approved, there’s a long, hard slog ahead for the former king of the high street.

There was good news and bad news yesterday for another retail chief, Mike Ashley, who has managed to retain his billionaire status despite the dire state of the high street.

The sportswear tycoon is close to offloading his Newcastle United football club to Sheikh Khaled bin Zayed al-Nahyan of the United Arab Emirates in a reported £350 million deal.

Ashley has been keen to end his more than decade-long ownership of Newcastle for some time – as have the club’s army of disgruntled fans, who have long complained about the Sports Direct boss’s lack of spending on the team.

A number of potential bids from other buyers have fallen through in the past but this time both sides appear confident a deal will be done.

Ashley bought Newcastle in 2007, paying £134 million. The club has been relegated twice from the Premier League under his ownership.

In another deal, Ashley’s Sports Direct received a £120 million cash injection through the sale and leaseback of its huge Shirebrook headquarters.

The Derbyshire complex houses the warehouse that was at the centre of the row over working conditions for Sports Direct employees in 2016, when MPs said it had been run like a “Victorian workhouse”.

As for the bad news, Ashley’s investment in the troubled Soccer Goals company is looking even less astute than it did in March, when the troubled five-a-side football company revealed it had misstated its VAT returns over a period of several years.

It has now brought in forensic accountants to get to the bottom of the problem, and warned that current year results will fall materially short of expectations.

Ashley is sitting on a 19 per cent stake in the company and, had the shares not already been suspended in March, at just 27.2p, they’d have tumbled further, dealing another blow to Ashley’s already battered reputation as a stock-picker.