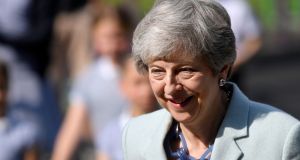 Pressure on British prime minister Theresa May to quit added to Brexit concerns on the markets.

European shares sank on Thursday as the latest round of US-China trade friction and a soft set of business surveys sapped investors’ risk appetite. Pressure on British prime minister Theresa May to quit added to Brexit concerns.

Euro zone business growth was also weaker than expected in May, data showed.

Building materials group CRH dropped 1.9 per cent to €28.35, while packaging group Smurfit Kappa sank more than 5 per cent to €25.00 amid the global turmoil.

Real estate investment trust stock Hibernia added more than 0.4 per cent on a day when it reported a 15.8 per cent jump in pre-tax profits and said it had grown its net rental income by 16.6 per cent.

London’s blue-chip FTSE 100 slumped 1.4 per cent and its exporter-heavy components shrugged off the benefit of a slide in the pound to four-month lows on Brexit woes.

As May’s position hung in the balance, Royal Mail skidded 10.3 per cent to a record low on the mid-cap index as traders weighed the slight chance that a possible Labour government might renationalise the company.

Shares of TUI fell 4.8 per cent after a survey by Barclays showed more British people would opt for “staycations” this year over heading for trips abroad, with many citing the impact of Brexit on travel and finances.

Mid-cap outsourcing firm Serco jumped 7.4 per cent on its best day in more than five months, after saying it would buy a US Navy supplier.

Madame Tussauds-owner Merlin Entertainments advanced 7.5 per cent after hedge fund ValueAct urged it to explore a deal to go private.

Europe’s auto sector index, among the most exposed to trade tensions, fell nearly 3 per cent to an over three-month low, while energy stocks led losses with a 3.3 per cent fall, tracking oil prices lower.

In Italy, the banks index has slipped 20 per cent from mid-April peak, confirming that the battered sector is in bear market, amid renewed worries about a showdown between Rome and Brussels over the Italian budget.

However, shares in Juventus climbed 3.3 per cent after a report suggested Manchester City’s Pep Guardiola will become coach of the Italian soccer team from next season.

Wall Street stock indexes fell more than 1 per cent in early trading, as investors sold off technology, industrials and energy stocks on fears that a spiralling trade war between the US and China would crimp global growth.

Technology, among sectors most exposed to China, was the hardest hit. Microsoft, Amazon and Apple were all down more than 2 per cent, dragging the sector lower, while the chip index dropped 2.3 per cent.

Oil prices plunged more than 4 per cent on trade fears, leaving the energy index down 3.2 per cent, the biggest decliner among the major 11 S&P sectors.