European markets dip on fears about Brexit and trade war

C&C and Ryanair provide most movement on Iseq 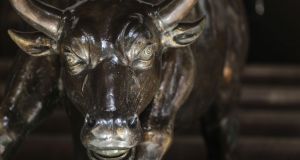 US stocks dipped on Wednesday as reports that Washington could impose restrictions on another Chinese technology company fanned trade tensions. Photograph: Bloomberg

European markets dipped on Wednesday on trade war fears and renewed uncertainty over the UK’s planned departure from the European Union.

Results showing profits up 21.5 per cent at €104 million and earnings per share up 26 per cent at 23.4 cent put the fizz back into cider maker C&C, whose stock hit a one-year high of €3.76 in Dublin on Wednesday.

The drinks group closed 4.89 per cent up at €3.755. Traders said chief executive Stephen Glancey’s prediction that earnings growth would stay in double figures lured investors to the stock.

Ryanair was the day’s other big story. The low-cost carrier shed 2.83 per cent to close at €10.135 after hitting a low of €10.03. Equity analysts at British bank HSBC downgraded the stock on Wednesday to “reduce” – effectively a sell recommendation – suggesting that the airline’s fall in profits was partly due to weak demand and saying a €700 million share buyback would exceed the company’s cash flow.

Most European airline stocks hit turbulence as a result with investors selling shares in Ryanair rivals such as EasyJet.

Hibernia Real Estate Investment Trust (Reit), due to report results for the 12 months to March 31st on Thursday, was down 1.16 per cent at €1.36. Dealers said Brexit worries fed into Irish property stocks. Green Reit was flat at €1.708.

Dealers also suggested that concerns at Brexit’s potential impact on Irish tourism were behind a 2.83 per cent fall in hotel group Dalata’s stock to €5.49.

Irish builders’ merchant Grafton slipped 1.5 per cent to 896 pence sterling in London, where the Woodie’s DIY owner is listed, as construction-linked shares fell on Brexit woes. Grafton earns a high proportion of its revenue selling goods to British builders.

Airline group Norwegian Air Shuttle, whose Irish subsidiary operates many of its transatlantic routes, nosedived 2.06 per cent to 38 Norwegian Kroner. The troubled carrier was caught in general desertion of aviation. Irish Swiss baker Aryzta fell 3.36 per cent to 1.323 Swiss francs.

Danish IT software company SimCorp soared 11 per cent to 676 Danish kroner as it affirmed guidance, dispelling market fears of an outlook cut after reporting quarterly results that beat expectations. Payments company Wirecard jumped 5.9 per cent to €158.85 on a partnership deal in India over identity cards.

The pan-European Stoxx 600 index closed down 0.08 per cent with losses on Italy’s MIB and France’s Cac offset by gains in Britain’s FTSE 100 and Germany’s Dax.

US stocks dipped on Wednesday, as reports that Washington could impose restrictions on another Chinese technology company fanned trade tensions, while investors awaited the release of minutes from the Federal Reserve’s latest policy meeting.

Nordstrom declined 9.6 per cent after the department store operator reduced its full-year sales and profit forecasts. Retailer Target jumped 9.2 per cent the most among S&P 500 companies, after its quarterly same-store sales and profit beat estimates.

A near 2 per cent fall in Apple, along with chipmakers, dragged down the S&P technology index 0.45 per cent. – Additional reporting: Reuters

1 Why are markets booming when a crash is on the way?
2 Could your old car be giving away all your secrets to its new owner?
3 Permission sought for €150m film and media campus in Wicklow
4 Dunnes Stores trials online ordering from Cornelscourt outlet
5 Vodafone to speed up 5G rollout using new technology
6 Covid-19: Publicans and restaurateurs row over calls for VAT cuts
7 AIB U-turn on mortgage block for those on Covid wage subsidy
8 Staff at Bewley’s cafe on Grafton Street are made redundant
9 Ryanair passenger traffic slumps 97% as shutdown restricts travel
10 Paschal Donohoe warns EU against going it alone on digital sales tax
Real news has value SUBSCRIBE