Stocks climb across Europe on the back of election results 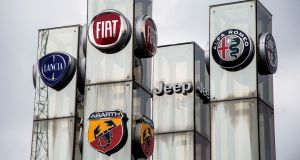 News of a proposed merger between Fiat Chrysler and Renault helped buoy markets. If it goes ahead, the $35 billion-plus tie-up would alter the landscape for rivals including General Motors and Peugeot maker PSA Group, and could spur more deals. Renault said it was studying the proposal from Italian-American FCA with interest, and considered it friendly. Shares in both companies surged on the news.

Public holidays in the UK and United States kept markets there closed and hit trading activity elsewhere, with volumes thin on the ground.

Despite optimism in Europe, the Irish market broke with the trend, with the the Iseq index of shares slipping 0.1 per cent to end the day at 6114.78. The market had hit a low of 6107.17 earlier in the day.

There were mixed fortunes for banking stocks, with Bank of Ireland down 2.15 per cent by the close. The shares had fallen as low as €4.7004 during the session, but recovered to finish the day at €4.73.

Permanent TSB fell almost 3 per cent to €1.30, reversing the gains it had made on Friday.

But there was good news for AIB, which saw its stock continue to rise to end the session marginally higher at €3.848, off the highs of €3.936 recorded during the day. That follows Friday’s 0.6 per cent gain, after analysts at Citigroup upgraded the stock to buy.

US stock futures drifted. While French and German bonds advanced, Italy’s fell as the country was said to face a $4 billion fine over failure to rein in debt. The yuan steadied after a senior Chinese economic official said speculators “shorting the yuan will inevitably suffer from a huge loss”.

The yen dropped as the US and Japan discussed a trade deal. The euro held most of its gains from Friday, while the dollar rose against a basket of major currencies.

Holidays in the UK and US on Monday helped hold down trading volumes across markets.

Investors are looking for signs of stabilisation after trade frictions and mixed economic data put global stocks on course for their first monthly decline of 2019. On a visit to Tokyo, President Donald Trump said the US was making “great progress” in trade negotiations with Japan even though a deal could come only after the country’s elections in July. At the same time, he said America wasn’t ready to strike a trade deal with China.

“There was a lot of speculation about an early US-China trade deal,” said Paul Donovan, chief economist at UBS Global Wealth Management, in a research note. “The problem now is that while individual deals are helpful, the general uncertainty created by trade taxes is creating economic damage.”

Elsewhere, Brent oil futures climbed. Iron ore continued its rally on concern there’s a global shortage in the seaborne market. And bitcoin climbed to the highest level in a year as it has surged almost 70 per cent this month. – Additional reporting: Bloomberg, Reuters

1 Could your old car be giving away all your secrets to its new owner?
2 ‘The rental situation stops me moving back home’
3 Brexit: System agreed for Irish goods to skip checks on UK trade
4 Why are markets booming when a crash is on the way?
5 Stocktake: Playing poker with the day traders
6 David McCullagh announced as co-host of RTÉ Six One News
7 Former Worldspreads chief Conor Foley faces €730,000 fine
8 Ireland faces 'deep downturn' this year and may not rebound until 2024 if there is a second wave
9 Red tape logjam creates fear for Irish timber supply
10 Dublin-founded Future Finance agrees £100m debt facility
Real news has value SUBSCRIBE