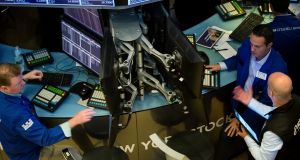 Irish shares outperformed European peers yesterday but bank stocks in Italy took a hit as concerns about a possible fine on the country exacted a heavy toll on sentiment. US stocks eked out gains but the likelihood of a protracted trade war between the US and China kept investors on the sidelines.

Budget airline Ryanair rose 3.3 per cent to €10.63 on extremely heavy volume while Flutter Entertainment, formerly Paddy Power Betfair, was also among gainers, rising 4.2 per cent to €66.46.

There was a divergence in the share prices of the Republic’s two main banks, with Bank of Ireland rising 3 per cent to €4.88 while AIB dipped 2.3 per cent to €3.76.

Another loser on the day was Irish Ferries owner ICG, which saw its share price tumble almost 5 per cent to €4.52. However, there was little liquidity in the stock with just over 158,000 shares changing hands.

British American Tobacco and Imperial Brands were among the biggest drags on the main index after data from Nielsen showed cigarette industry volumes deteriorated in the four weeks to May 18th.

AstraZeneca snapped a four-day winning streak and rival GlaxoSmithKline also fell after rising for the last three sessions. The drugmakers gave up more than 2 per cent each.

Tour operator Thomas Cook, hammered last week by worries over its cash flow and summer sales, climbed more than 21 per cent on its best day since early December, after Berenberg raised its rating to “hold” from “sell”, citing bids the company has said it has received for its airline unit.

EUROPE The pan-region Stoxx 600 fell 0.2 per cent, with banks shedding 0.4 per cent and chemicals stocks declining 1 per cent.

Germany’s Dax ended 0.4 per cent lower, matching the decline in Paris-traded equities, while Milan-traded stocks slid 0.5 per cent, with the country’s deputy prime minister saying the European Commission could slap a €3 billion fine on the country for breaking EU rules due to its rising debt and structural deficit levels.

In contrast to Italian lenders, Greece’s banks powered Athens-traded stocks 2.3 per cent higher, to a more than one year closing high on hopes a more business friendly government will emerge from a snap election called on Monday. Piraeus Bank surged 15 per cent to lead the benchmark’s gainers, followed by Eurobank Ergasias, with a 9.8 per cent rise.

Tempering the gloom on European bourses, stocks of auto- makers and suppliers rose for a third session, adding 0.7 per cent on the day. Peugeot added 4.6 per cent while Knorr Bremse rose 1.6 per cent.

was about 4 per cent away from its record high hit on May 1st, while the blue-chip Dow Jones index posted its fifth straight week of decline.

The rate-sensitive banking sector dropped while the broader financial sector fell 0.15 per cent and weighed on the S&P.

The technology sector, which is among the worst-performing S&P sectors this month, rose 0.54 per cent, helped by a 6.3 per cent jump in Total System Services. Global Payments said it would buy the payment technology company for about $21.5 billion in stock. Its shares declined.

Among others, Activision Blizzard rose 4.2 per cent after Goldman Sachs upgraded its stock to “buy” and said the video-game publisher would benefit from its recent releases.

Australia’s economy is in recession for first time since 1990s