Sterling on track for longest ever losing streak against euro 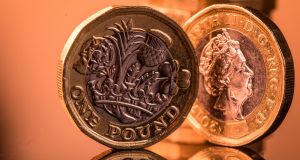 Some traders said they saw a rising chance of Britain leaving the European Union without a transition deal. Photograph: Bloomberg

Sterling fell on Wednesday and was on track for its longest ever losing streak against the euro though it recouped some of its earlier falls in reaction to a Sky News report that UK prime minister Theresa May was about to resign.

The currency had earlier plumbed four-month lows against the dollar, falling as much as 0.6 per cent at one point as it became clear that Mrs May’s last-ditch Brexit plan had failed to win over either opposition lawmakers or many in her own party.

With the plan appearing dead in the water, some traders said they saw a rising chance of Britain leaving the European Union without a transition deal to smooth economic disruption.

It clawed back some losses after Sky News cited an MP as saying May would resign later on Wednesday.

“[May leaving] would take away the uncertainty. If she goes, we can move to the next step which is the leadership contest,” said Societe Generale FX strategist Kenneth Broux.

“Of course, that is very short term and doesn’t guarantee the overall direction of sterling.”

Sterling is set for its 13th straight day of falls against the euro, measured by London trading prices, the longest such run since the euro began trading in 1999, according to Refinitiv data. – Reuters