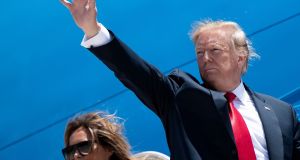 Investors breathed a sigh of relief after US president Donald Trump indicated that the protracted trade war with China could end soon. Photograph: Getty Images

European shares advanced – with the Iseq in Dublin standing out as a rare weak spot – as investors looked beyond UK prime minister Theresa May’s plans to quit to focus on fresh hopes surrounding a US-China trade deal.

Ms May will step down on June 7th as Conservative Party leader, but remain prime minister until her successor is found, with bookmakers’ odds showing that her former foreign secretary, Boris Johnson, is favourite to win.

Ms May’s announcement on Friday morning “comes as no surprise, but it could lead to a chain reaction that will ultimately be negative for UK market sentiment,” said Seema Shah, senior global investment strategist at Principal Global Investors.

Meanwhile, investors breathed a sigh of relief after US president Donald Trump indicated that the protracted trade war with China could end soon, saying on Thursday that Huawei Technologies could be included in the trade deal. However, no high-level talks have been scheduled since the last round of negotiations in Washington two weeks ago.

However, banks were in demand, with AIB gaining 0.6 per cent to €3.84, as analysts at Citigroup upgraded their rating on the stock to buy from neutral. Irish banks have come a long way and the next steps for them are now a return to consistent loan growth, improving profitability and delivering on their potential to return excess capital to shareholders, according to Citigroup.

Smurfit Kappa moved 1.7 per cent higher to €25.43, recovering from losses on Thursday, which had been the result of a placement of a 3 per cent stake in the company on the stock market at a discount. Singaporean sovereign wealth fund GIC confirmed on Friday that it was behind the sale.

Housebuilders, considered prone to any hit to the economy from a chaotic “no-deal” departure from the European Union, barely budged after Ms May’s speech.

“It’s been so well-flagged and UK assets have been hammered all week. Realistically we know no more or less than we did yesterday,” said a trader.

Event manager Informa added 2.5 per cent after an upbeat trading update, while BT lost 1.1 per cent after regulator Ofcom said the telecoms group will be forced to give rivals greater access to its core network Openreach.

Among midcaps, Royal Mail jumped 6.4 per cent on its best day in 5½ years after two brokerage firms upgraded the stock following results earlier this week in which the company detailed its turnaround plan.

Mothercare surged 8.3 per cent after its annual report showed restructuring efforts were paying off.

Milan’s MIB index led the way among country indexes with its 1.2 per cent rise, recovering from Thursday’s more than 2 per cent slide. Germany’s trade-sensitive DAX was up 0.5 per cent.

France’s Casino shares jumped 7.5 per cent after the retailer said its parent company Rallye’s filing for protection from creditors had no impact on the execution of its strategy.

US stocks were higher in early afternoon trading, ahead of a long Memorial day weekend, with technology shares, that were among the hardest hit this week, on the advance, boosted by gains in chipmaker Intel and iPhone maker Apple.