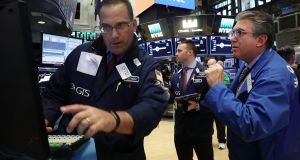 Traders work on the floor of the New York Stock Exchange.

Switch Inc jumped by almost half in its trading debut after raising $531 million in an initial public offering, the third-biggest technology IPO this year in the US.

Only Snap Inc’s $3.9 billion IPO and Altice USA Inc’s $2.2 billion offering topped Switch’s deal this year in the US, according to data compiled by Bloomberg.