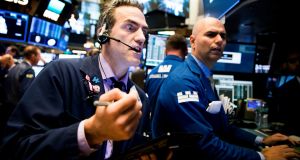 Traders at the New York Stock Exchange. The S&P 500 and the Nasdaq hit record levels on Friday, the last day of the third quarter, helped by gains in technology and financial stocks. Photograph: Justin Lane/EPA

European stocks, propelled by a weaker euro, recorded their biggest monthly gains this year on Friday, but Volkswagen shares sank on further provisions for its diesel scandal settlements. A weakening euro has taken pressure off Europe’s equities and especially the exporter-heavy Dax, helping investors find renewed enthusiasm for the asset class after the slow summer months.

The pan-European STOXX 600 steadied at a two-month high, while euro zone stocks hit their highest in three months, on track for a quarterly gain after falling back in the second quarter. “Europe is ticking more and more boxes,” said Monique Wong, director of global markets at Coutts. “It’s slightly slowed down with the appreciation of the currency but the euro is still a long way below previous highs.”

Fuel and forecourt retailer Applegreen saw its shares fall 2.3 per cent to €6.05 after the company placed over eight million shares at a price of €5.80 per share. The company said the proceeds would be used to fund a pipeline of potential additional acquisition and development opportunities.

Ryanair closed the day down marginally at €16.32 after being down 2.5 per cent earlier in the session as the controversy over cancelled flights rumbled on. Bank of Ireland and AIB, meanwhile, rose marginally to close at €6.87 and €5.08. Swiss-Irish food giant Aryzta rose 5 per cent to €26.01 amid news the company plans to sell its La Rousse Foods business in Dublin. Paddy Power Betfair rose 1 per cent to trade at €83.70.

Britain’s FTSE signed off September with a monthly loss on Friday, underperforming continental peers in a month that saw sterling shoot to its highest level since the Brexit vote. The FTSE 100 index ended Friday’s session 0.7 per cent higher at 7,372.76 points, however, as GDP data showing that UK growth slowed to a four-year low in the second quarter put pressure on sterling on the day.

Financials, consumer stocks and miners contributed the most to gains. Glencore, Rio Tinto, BHP Billiton and Anglo American were up between 0.7 and 2.6 per cent. Oil majors were in positive territory as oil prices boosted the sector, with Royal Dutch Shell and BP both up 0.3 per cent.

Among smaller stocks, British construction and support services group Carillion plunged 20 per cent after it warned it expected full-year results to be lower than market forecasts, as it booked a further provision relating to services contracts. ITV was the biggest individual gainer, rising more than 3.5 per cent after Barclays raised its rating on the stock to “overweight” and said advertising was improving in the UK.

Volkswagen shares fell as much as 3 per cent on Friday, as traders and analysts expressed dismay that the company was still booking charges for “dieselgate”. The company had earlier announced it was taking another $3 billion charge to fix diesel engines in the US, lifting the total bill for its emissions-test cheating scandal to around $30 billion. The German group is struggling to put the two-year-old scandal behind it, and working to transform itself into a maker of mass-market electric vehicles.

The S&P 500 and the Nasdaq hit record levels on Friday, the last day of the third quarter, helped by gains in technology and financial stocks. Reports of president Donald Trump’s meeting with former Federal Reserve governor Kevin Warsh to discuss his potential nomination as Fed chairman was seen as a trigger for financial shares. The market’s focus also remained firmly on Trump’s tax plan and his ability to push it through Congress. Eight of the 11 major S&P sectors were higher, led by the technology sector. Facebook’s 1.25 per cent rise and Amazon’s 0.78 per cent gain were the biggest boosts to the Nasdaq. Financials rose 0.22 per cent, helped by gains in Wells Fargo. Alphabet’s 1.12 per cent rise and Amazon’s 0.6 per cent gains propped up the Nasdaq.