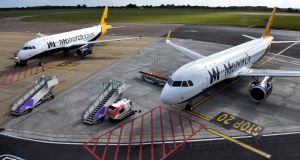 Markets gained ground on Tuesday as the dollar weakened slightly against the euro. The Irish Stock Exchange outperformed peers as a number of leading shares advanced.

Property investor Green Reit gained 1.86 per cent to €1.533 after analysts at Dublin stockbroking firm Davy set a price target of €1.78 on the stock and ranked it as an outperformer.

Ryanair pushed past the €17 mark for the first time since news of its cancellation woes broke last month. It closed 2.66 per cent up at €17.34.

Traders said that strong passenger numbers for September aided its cause. They also pointed out that investors expect the Irish carrier to benefit from the failure of UK rival Monarch.

Irish Residential Properties Reit tumbled more than 3 per cent in early trade on news that it had lost an appeal against a decision refusing it permission to build almost 500 apartments in Sandyford in Dublin. However, it pared those losses to close just 0.68 per cent down at €1.46.

Irish-based exploration group Tullow Oil gained 3.79 per cent to close at 186.20 pence even though oil prices themselves eased.

International Consolidated Airlines Group, owner of Aer Lingus, British Airways and Spain’s Iberia and Vueling, climbed 2.47 per cent as investors expected it to benefit from the failure of UK carrier Monarch, which went into administration this week.

Britain’s top share index climbed to a near eight-week high on Tuesday, boosted by a slide in the pound after weaker construction sector activity and rumbling uncertainty over Brexit negotiations.

Corporate news also supported the index on the day. Heating and plumbing product supplier Ferguson jumped 4 per cent to the top of the FTSE after reporting a rise in trading profit and a £500 million share buyback plan.

Retailers were some of the top gainers, with Sainsbury up 3.5 per cent and Tesco up 2.1 per cent. Berenberg initiated coverage of Sainsbury with a “buy”, naming the retailer its top pick in a sector it said was facing intensifying competitive and cost pressures.

Tesco rose ahead of its interim results on Wednesday. Investors hoped that the company would begin paying dividends again.

Advertising giant WPP was among the worst performers, down 2.1 per cent after Morgan Stanley sold 22.5 million shares. The agency’s shares are down nearly 25 per cent since the beginning of the year.

BAE Systems was also among the biggest losers, retreating 1.7 per cent after a downgrade by Berenberg, whose analysts said they expect no organic revenue growth and modest earnings progression in the next two years.

German airline and aerospace group Lufthansa hit a 52-week high of €24.485 as its sector performed well across Europe.

European shares closed higher as a sell-off in Spanish stocks eased and financials gained. Germany’s Dax was up 0.6 per cent and the Cac 40 in France pushed 0.3 per cent higher.

US indices again hit record highs on Tuesday, boosted by a rally in technology stocks and gains in Ford Motor and General Motors after strong September vehicle sales.

Automakers posted higher US new vehicle sales in September, as consumers in hurricane-hit parts of the country rushed to replace flood-damaged cars. General Motors’ shares rose 3.7 per cent to a record high of $43.70, while Ford’s stock was up 2.3 per cent at $12.37.

Technology stocks have rebounded from a sharp selling seen last week, with Apple and Intel supporting Tuesday’s gains. The sector has been the biggest gainer year-to-date, up 26 per cent so far.

1 Are there annual limits on inheritances or gifts to a child?
2 US threatens retaliation against EU over proposed carbon tax
3 Comcast acquires Irish cloud-based telco Blueface
4 Money matters: ‘My father embarrassed us with his haggling’
5 Pilita Clark: When a rude boss keeps you waiting, why not walk out?
6 Opioid executive admits to ‘no morals’ ahead of prison term
7 Who are Ireland’s 17 billionaires?
8 Firm sues Trinity College over contract for managing visitors
9 Ryanair to pay portion of Peter Bellew’s legal costs, court rules
10 Abtran challenges award of €63m contract by Irish Water to rival company
Real news has value SUBSCRIBE