Irish exploration company has issued 700,000 shares in advance of egm on Friday 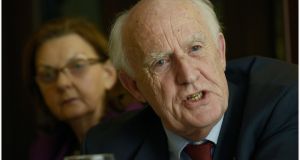 Conroy Gold chairman Richard Conroy: he now holds about 21.6% of the company’s shares

A shareholder in Conroy Gold and Natural Resources who has been pushing for changes to its corporate governance has criticised the company’s board for issuing new shares just days before an emergency general meeting (egm) is held.

Patrick O’Sullivan, the single largest shareholder in the Irish exploration company, was commenting on news that the company had applied for 700,000 new shares to begin trading on Ireland’s stock exchange after raising €210,000 to advance its project in Clontibret, Co Monaghan.

Mr O’Sullivan said the move would dilute his shareholding in the company in advance of the egm.

A spokesman for Conroy declined to comment on Mr O’Sullivan’s remarks.

Mr O’Sullivan said he had written to the company advising it he was prepared to make a credit line of €300,000 available to the company in the form of a loan note.

Last month Mr O’Sullivan failed to achieve a High Court declaration that he and two of his nominees had wrongly been blocked by the company chairman from being elected directors of the company’s board.

Speaking to The Irish Times in advance of a High Court hearing on costs on Wednesday, Mr O’Sullivan noted that this latest share issuance diluted his shareholding by roughly 1.7 percentage points from 28 per cent.

The stock exchange was also told on Friday that Conroy Gold chairman, Richard Conroy, had upped his stake in the company by 100,000 shares. Mr Conroy now holds about 21.6 per cent of the company’s shares.

The company has also published a shareholder circular in relation to resolutions to remove Mr Conroy and Maureen Jones from the board of the company, and to appoint Mr O'Sullivan, Paul Johnson and Gervaise Heddle as new directors at the egm.