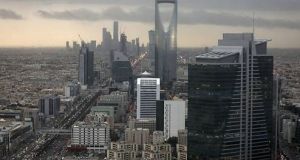 Abu Dhabi is said to have opened books on Monday for a three-part offering ranging from five to 30 years. Photograph: iStock

Abu Dhabi, home to about 6 per cent of the world’s oil reserves, is said to be considering raising about $10 billion (€8.5bn) from a dollar bond sale to help plug a budget deficit.

Encouraged by Saudi Arabia’s $12.5 billion sale last week, the biggest sovereign deal in emerging markets this year, Abu Dhabi opened books on Monday for a three-part offering ranging from five to 30 years, people familiar with the matter said, declining not to be identified because the talks are private. No final decision has been made on the size of the transaction, which will be subject to order books, they said.

The debt offering this week spurred a nine-basis-point increase in the yield on Abu Dhabi’s existing dollar bonds due 2021, the most since November, to 2.27 per cent.

An external representative for Abu Dhabi’s finance department did not immediately respond to a request for comment. – Bloomberg