Conroy Gold share issue should have no effect on costs, court hears 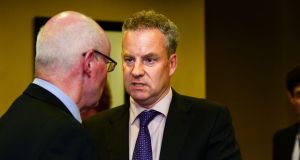 The issuing of shares last Friday by Conroy Gold should have no effect on the issue of legal costs, the High Court heard on Wednesday.

The case involving Conroy Gold and Natural Resources and its single biggest shareholder, Patrick O’Sullivan, resulted in the latter losing his bid for a High Court declaration that he and two of his nominees had wrongly been blocked by the company chairman from being elected directors of the gold mining company’s board.

Subsequent to the case, Conroy Gold issued 700,000 new shares last Friday and another 100,000 shares on Wednesday, raising a total of €240,000 to advance its project in Clontibret, Co Monaghan.

In a hearing for costs, counsel for Mr O’Sullivan, Niall Buckley, said that the issuing of shares last Friday is a matter the court can take into account with regard to costs because it was “quite a contentious strategy to adopt”.

Counsel for Conroy Gold suggested Mr O’Sullivan should bear the company’s cost of defending this matter.

Mr Justice Max Barrett has retired to consider the matter.