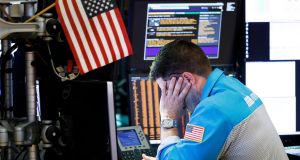 On Friday, three-month US treasury bills were yielding 2.3 per cent on Wall Street, while 10-year notes were priced at 2.16 per cent – the weakest reading since 2007, before the financial crash. Photograph: Justin Lane/EPA

Donald Trump’s favourite stocks index – the Dow Jones Industrial Average – has barely fallen 6 per cent between the US president starting May with a tweet signalling more tariffs on Chinese imports and ending the month with a sudden threat to slap new levies on Mexican goods.

Seasoned financial investors, however, are more worried about flashing red lights on bond markets, amid fears that Trump’s protectionist impulses will tip the world – in which many major economies are already slowing – into recession.

The market interest rate, or yield, on three-month US government debt rose convincingly this week above the yield on 10-year bonds – a phenomenon that has preceded every downturn on the world’s largest economy since the second World War.

This development goes against normal market conditions where buyers of long-term bonds expect higher interest rates than those who invest for only a matter of months. There are good reasons for investors typically demanding higher yields on long-term loans, as inflation eats into their returns over time, and they face greater risks – of an extremely low yield in the case of government bonds – of not getting their money back.

When short-term rates fall below long-term ones – which bond market types refer to in their lingo as an inverted yield curve – it signals that investors are expecting the economy to fall into recession, and are piling into the safest assets they can get their hands on to ride out the storm. Long-term US bonds, after all, are considered to be one of the world’s safest investments.

It also indicates that investors are betting that an economic shock will force central banks to lower rates.

As of early trading on Wall Street on Friday, three-month US treasury bills were yielding 2.3 per cent while 10-year notes were priced at 2.16 per cent – the weakest reading since 2007, before the financial crash.

Closer to home, the yield on Germany’s safe-haven 10-year bonds fell to a record low of minus 0.2144 per cent on Friday, meaning investors are happy to pay Angela Merkel the pleasure of holding their money amid growing fears of a recession. Irish yields are currently 0.43 per cent, half their average rate over the past 12 months, in a theme that’s being played across the globe.

The bond markets are painting a picture that global equity investors – despite a recent correction – haven’t really begun to contemplate. Both can’t be right.

News that Permanent TSB has been fined €21 million for its involvement in the State’s tracker mortgage scandal has rattled an industry that has proven to be all too slow in admitting the extent of customer overcharging – let alone making amends.

It is more than four times the previous maximum penalty levied by the Central Bank since its administrative sanctions procedure came into effect in 2006. The previous highest, incidentally, was €4.5 million collected from PTSB’s former subprime mortgages unit Springboard, in 2016, for its own tracker misdemeanours.

The industry-wide debacle goes back to 2008, when lenders started to deny tens of thousands of borrowers their right to cheap mortgages – linked to the European Central Bank’s main rate – as their own borrowing costs shot up during the financial crisis.

As such, there had been a strong view that any penalties would be levied under the sanctions regime that existed at the time, which were capped at €5 million for a regulated financial firm.

The PTSB case proves otherwise. Regulators have been able to find that the bank’s wrongdoing continued beyond 2013, when they were given powers to impose fines of up to €10 million, or 10 per cent of a firm’s annual turnover, whichever is the highest.

The €21 million PTSB fine equates to almost 5 per cent of its €442 million of total operating income last year. That’s after it received a 30 per cent discount on a €30 million penalty the Central Bank was prepared to charge if PTSB didn’t agree the settlement quickly.

The wider industry – with AIB and its EBS unit, Bank of Ireland, Ulster Bank and KBC Bank Ireland also under enforcement investigation – could face combined fines of up to €350 million on the same basis, with the two pillar banks accounting for €270 million of the total.

Goodbody Stockbrokers analyst Eamonn Hughes said in a note to clients on Friday that such charges would be “wholly unfair”, as that would include income from AIB and Bank of Ireland’s UK businesses, which were not involved in the scandal.

“BoI’s retail Ireland business generated €1.26 billion of revenue last year, solving back for a ‘potential’ fine of circa €60 million. However, given mortgages only account for 68 per cent of Retail Ireland revenue, we believe a pro-forma assessment of circa €40 million is more appropriate,” Hughes said. On the same basis, he calculates a potential liability of €63 million for AIB.

However, Derville Rowland, director-general for financial conduct at the Central Bank, appears to be on a mission to inflict maximum pain to make sure banks learn a lesson.

Fairness, after all, didn’t come into the equation when lenders were ignoring their own customers’ rights.