Paddy Power Betfair to begin buying back £300m of shares

Goodbody Stockbrokers to repurchase shares on behalf of gambling giant 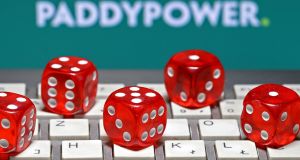 Paddy Power Betfair said its broker Goldman Sachs bought £200 million worth of the group’s shares back from investors in a programme begun in May. Photograph: Reuters/Dado Ruvic/Reuters

Irish gambling giant Paddy Power Betfair is set to begin buying £300 million of shares (€335 million) back from investors, the group said on Monday.

Paddy Power Betfair said its broker Goldman Sachs bought 2.43 million of the group’s shares, worth a total of £200 million, back from investors in a programme begun in May.

The company announced a second programme earlier this month under which it will repurchase a further £300 million worth of equities. Paddy Power Betfair confirmed on Monday that it was beginning this programme.

Following the publication of its interim results earlier this month, Paddy Power Betfair said that it had hired Irish firm, Goodbody Stockbrokers, to buy back a maximum of £300 million worth of ordinary shares in the company.

Both schemes are part of the group’s plan to return a total of £500 million to shareholders that it announced in May this year. The company will cancel all repurchased shares.

1 Galway development could transform skyline with 21-storey tower
2 How do you know if you are wealthy? ( It’s not straightforward!)
3 The gadgets that can make travelling a bit more enjoyable
4 High Court overturns permission for height increase in Dublin apartments
5 Big tech ‘procedural queries’ delay decision on first data fines – watchdog
6 Don’t be fooled by Facebook’s ‘regulate us, please’ media blitz
7 Ardagh sees earnings growth slowing after solid 2019
8 ESB called out for ‘contributing to human rights violations’
9 Just 8,000 houses built last year offered for sale on open market, says CIF
10 How can I view my dead brother’s will if I’m not the executor?
Real news has value SUBSCRIBE