Shares in Ryanair fly higher after deal with pilots, while CRH and Smurfit both tumble 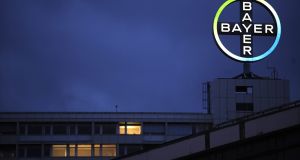 Bayer shares are under pressure as the German drugmaker braces for years of legal wrangling over the alleged cancer risks of glyphosate-based weedkillers.

European shares gradually fell into the red on Thursday after the latest round of US-China tariffs hurt trade-sensitive autos stocks and sentiment suffered as Wall Street indexes slipped into negative territory.

The Stoxx 600 edged down 0.16 per cent to 383.42 points, with most European bourses posting only modest losses.

The Iseq index followed other bourses lower on Thursday, with the Dublin market ending flat at 6,719.87.

Shares in Ryanair closed up 5.5 per cent to €13.87 after it confirmed a deal with Irish pilots. Earlier in the day they had climbed as high as 7 per cent.

Elsewhere, Iseq heavyweight CRH was down 1 per cent after it reported earnings before interest, tax, depreciation and amortisation (ebitda) that rose to €1.13 per cent.

The building materials giant said on Thursday that “ongoing challenges” in the Philippines market had hit earnings.

Cardboard and container group Smurfit Kappa is also facing challenges in other markets. Its share price slipped by half a per cent late on Thursday after it issued a statement defending itself after the Venezuelan government temporarily seized control of the company’s local subsidiary. The company’s stock ended the day down 0.8 per cent at €36.16.

UK shares gradually slid into negative territory on Thursday with the blue-chip FTSE 100 index closing down 0.15 per cent at 7,563.22 points with shares in the energy sector contributing to limit the losses.

Heavyweights Royal Dutch Shell and BP were up 0.8 per cent and 0.5 per cent respectively. Smaller firms in the sector such as Irish-founded Tullow Oil and Premier Oil, which announced profits for the first half of the year, were also rising. Both were up about 1 per cent.

A number of stocks, notably in the financial sector, such as Prudential, Royal Bank of Scotland and the London Stock Exchange were trading without entitlement to their latest dividend pay-out, trimming 4.24 points off the FTSE 100.

A surprise profit warning from tyre maker Continental sank the stock earlier in the week, and it fell a further 4.3 on Thursday, taking its losses to over 15 per cent since Wednesday’s open.

Carmakers Daimler, BMW and Volkswagen fell by 0.6 to 1.6 per cent, while Peugeot, Michelin and Renault were the biggest CAC 40 fallers, down 3.2 per cent, 2.2 per cent and 1.8 per cent respectively.

Bayer was down 2 per cent after the number of US lawsuits brought against newly acquired Monsanto jumped to about 8,000 and as the German drugmaker braces for years of legal wrangling over alleged the cancer risks of glyphosate-based weedkillers.

Shares in Swiss asset manager GAM fell 4.8 per cent. The stock is down 23 per cent since July 31st, when it suspended a director, halting dealing in some bond funds soon afterwards.

US stocks fell on Thursday, hurt by declines in commodity-related sectors and trade-sensitive companies as new trade tariffs came into effect in the US-China trade war, although gains in technology shares helped limit losses.

Shares of Hormel Foods fell 3.1 per cent and Sanderson Farms 1.4 per cent after they posted disappointing results, laying the blame partly on tariffs.

Victoria’s Secret-owner L Brands dropped 11.7 per cent, the most on the S&P, after cutting its full-year profit expectations.

Synopsys gained 6.4 per cent, the most on the S&P, after the electronic products and software maker beat quarterly estimates for revenue and profit. – Additional reporting: Reuters