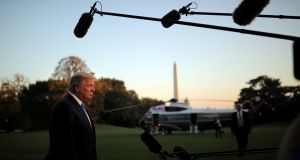 US president Donald Trump pauses as he speaks with reporters during his arrival at the White House from Indianapolis, in Washington DC. Photograph: Carlos Barria/Reuters

The dollar and US bond yields rose on Thursday after President Donald Trump proposed the biggest US tax overhaul in three decades and as strong US economic data supported the case for a Federal Reserve rate hike later this year.

In contrast, Japan’s Nikkei rose 0.55 per cent, taking cues from gains on Wall Street, where the Dow Jones Industrial Average rose 0.25 per cent while the S&P 500 gained 0.41 per cent.

Small-cap US shares, seen as benefiting the most from the proposed tax cuts, soared, with the Russel 2000 small-cap index notching a record high, rising 1.9 per cent for its biggest one-day gain in almost six months.

“The fact that Trump made the tax proposal was seen as a step forward,” said Hirokazu Kabeya, chief global strategist at Daiwa Securities.

European stock futures suggested gains for those markets too, with FTSE futures up 0.18 per cent and German DAX futures up 0.25 per cent.

Trump’s tax proposal faces an uphill battle in Congress, however, with his own party divided, and the plan already prompting criticism that it favours companies and the rich and could add trillions of dollars to the national debt.

“It is hard to expect this proposal to pass the Congress smoothly. We have to pay attention to how the Republicans will view this,” said Takafumi Yamawaki, chief fixed income strategist at JP Morgan Securities.

“It is possible that the net fiscal spending will be smaller than what the stock markets expect,” he added.

“I don’t see any changes to growth stories in emerging economies so I would assume selling in them will prove temporary, unless yields in the developed world keep rising sharply,” said a senior currency trader at a major Japanese bank.

US bond yields jumped with the yield on two-year notes rising to a nine-year high of 1.49 per cent in anticipation of a rate rise in December.

Comments from Fed Chair Janet Yellen that the Fed needs to continue with gradual rate hikes have cemented expectations for policy tightening by year-end.

New orders for key US-made capital goods grew more than expected in August, helping to boost optimism in the US economy’s outlook.