Travel and leisure stocks in Europe have been particularly fiercely hit 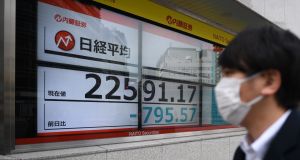 Traders have piled into asset classes that are seen as shelters during economic storms. Photograph: AFP via Getty

Shares listed on the Iseq index in Dublin shed more than a tenth of their value this week, as the rout fuelled by panic over coronavirus continued to sweep through global markets.

By the close of trading on Friday, the Iseq all-share index was down more than 11.5 per cent on its opening position this week. Its performance chimes with indices in other countries, which have suffered similar losses, as investors rushed to havens on mounting concerns the coronavirus outbreak will stunt the world economy and deal a heavy blow to corporate profits.

“What is going on in the Irish market is mirroring the concerns of elsewhere,” said Richard Flood, director of investment management at Brewin Dolphin. “The world’s economy is now very connected.”

He said that travel and tourism stocks were the “obvious” companies suffering the front-line impact of the coronavirus. Among the biggest fallers on the Irish exchange on Friday was Dalata, the Republic’s largest hotel group, which fell 6.2 per cent. Irish Ferries operator, ICG, was down 4.8 per cent, while recruiter CPL Resources fell 5.9 per cent.

US stocks dropped 4 per cent in morning trading on Friday bringing the drop in the S&P 500 from last week’s record high to 15 per cent. The decline followed a fresh bout of selling for European and Asian equities in the final trading day of the week. MSCI’s Asia Pacific index dropped 2.6 per cent, while the Stoxx Europe 600 and the FTSE 100 both dropped by 4 per cent.

“There is fear in the streets,” said Patrick Kaiser, portfolio manager for Brandywine Global Investment Management. “No one wants to have exposure over the weekend.”

The MSCI barometer of stocks in developed and emerging markets fell 3.3 per cent on Friday and has tumbled 11 per cent since the end of last week.

The declines mark a pullback in stock markets that have struck a series of record highs of late. Still, they represent the worst week for global equities since the depths of the financial crisis in 2008.

Travel and leisure stocks in Europe have been particularly fiercely hit, plummeting 19 per cent from last week in the heaviest decline since the terrorist attacks in September 2001.

“Whereas, just a week ago, investors were regarding the Covid-19 coronavirus as being predominately a Chinese issue, it is now understood to be a fast-spreading global concern,” said Paul O’Connor, head of multi-asset at Janus Henderson Investors.

Gold had been in demand this week as a hedge against sliding stock markets. But it also succumbed on Friday, with the price sliding 3.7 per cent to $1,582 an ounce, its biggest one-day drop since 2013. “We attribute this to forced selling aimed at offsetting losses elsewhere and covering so-called margin calls,” said Carsten Fritsch, an analyst at Commerzbank.

The Vix index, one of the most closely watched measures of expected volatility in Wall Street stocks, shot up as high as 47. It has risen almost three-fold in the past week as traders look to hedge against further tumult.

Traders have piled into asset classes that are seen as shelters during economic storms. US government debt, considered to be one of the safest holdings, has rallied sharply. The 10-year treasury note yield shed more than a quarter of a percentage point this week, dropping below 1.2 per cent on Friday for the first time to hit 1.167 per cent.

The dramatic drop in yield on US government debt “reflects the sudden tightening of financial conditions”, said Anshul Pradhan, a strategist at Barclays. Deutsche Bank estimates this week’s market rout has caused the equivalent of a 0.12 percentage point increase in the Federal Reserve’s main interest rate.

“Over the past few days financial conditions have tightened sharply in response to rising fears that the coronavirus could exert a more severe and persistent drag on global and US growth than previously expected,” Deutsche Bank said.

Investors have been gripped this week by rising concern that the spread of Covid-19 far beyond Asia – including a worsening outbreak in Italy and indications of the first community transmission in the US – will disrupt the economy. More than 83,000 people have been infected and 2,858 have died.

European governments have taken action in an attempt to arrest the virus’ spread. Germany quarantined about 1,000 people in a town in the country’s west, while some 50,000 people have been locked down in Italy’s industrial north.

The corporate fallout has also deepened. Geneva’s annual motor show was called off on Friday as Switzerland launched a ban on events attended by more than 1,000 people. Other major industry gathering such as the Mobile World Congress in Barcelona have also been cancelled.

Bank of America has predicted global growth will slow in 2020 to below 3 per cent – the weakest pace of the post-crisis era. Goldman Sachs added that US corporate profits would stagnate this year, slashing its previous expectation for earnings growth.

Concerns over the growing economic implications of the outbreak have also ricocheted to other asset markets. Investors have aggressively sold low-rated US corporate debt – a market that is watched closely by the Fed as a proxy for investor sentiment and financial conditions. The premium in yield demanded to hold so-called junk bonds has lurched higher to 4.6 percentage points from 3.7 points last Friday.

Oil prices fell further on Friday with Brent crude, the international benchmark, dropping 3 per cent to $50.55 a barrel. West Texas Intermediate, the US marker, dropped 4 per cent to $44.97, its lowest level in more than a year.