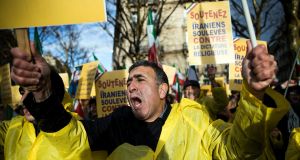 Dozens of protesters demonstrate against the Iranian regime and in support of the Iranian anti government demonstrators near the Iranian embassy in Paris, France. Photograph: Etienne Laurent/EPA

Oil prices on Thursday hit their highest in more than two and a half years, boosted by tensions in key producer Iran and by ongoing Opec-led output cuts.

Prices were also buoyed by Asia’s stock markets, which flirted with 10-year highs on Thursday amid strong data from leading economies including the United States, Japan and Germany.

Beyond a brief intraday spike in May, 2015, these were the highest crude price levels since December, 2014, at the start of the oil price downturn.

“The market is clearly getting more bullish on oil as inventory levels get closer to the five-year average. Geopolitical uncertainty in Iran, Opec’s third largest producer, is also helping to support the price as citizens are again protesting the government,” said by William O’Loughlin, investment analyst at Australia’ Rivkin Securities.

Iran’s elite Revolutionary Guards have deployed forces to three provinces to put down anti-government unrest that has been ongoing for a week, their commander said on Wednesday.

The unrest in Iran has not affected the country’s oil output, however.

“The continued Iranian protests have triggered off a ‘what if’ reaction in an already extremely skittish oil market,” said Sukrit Vijayakar, director at energy consultancy Trifecta.

He added that beyond potential strikes by Iranian oil workers, the risk of supply disruptions was low as “Iran’s oil resources are not near any of the major population centres or sites where the protests are playing out.

In the United States, crude oil inventories fell by 5 million barrels in the week to December 29th to 427.8 million barrels, industry group the American Petroleum Institute said on Wednesday.

Potentially undermining the trend towards tighter market conditions is US oil production, which has risen by almost 16 per cent since mid-2016, hitting 9.75 million barrels per day (bpd) at the end of last year.

Official US Energy Information Administration (EIA) storage and production data is due on Thursday. - Reuters