European stocks start 2018 in the red, failing to capitalise on a positive Asian session 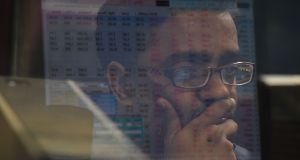 European stocks started 2018 in the red, failing to capitalise on a positive Asian session as the strength of the region’s common currency weighed on exporters. Photos: Getty Images

European stocks started 2018 in the red, failing to capitalise on a positive Asian session as the strength of the region’s common currency weighed on exporters.

The euro headed for its strongest level in three years as the region’s buoyant economy was seen increasing the chances of an end to central bank stimulus this year.

The currency jumped, sapping stocks, and bonds slid as a slew of data signaled a potential uptick in inflation in the euro area, after manufacturing growth accelerated to a record in December.

The numbers followed comments at the weekend from European Central Bank policy maker Benoit Coeure, who said that unless inflation disappointed there’s a “reasonable chance” the central bank’s extension of QE in October could be the final one. While Coeure didn’t mention the exchange rate, his comments were a boon for euro bulls and coincided with a period of ongoing dollar weakness.

The dollar weakened against all G10 peers and Treasuries fell.

The Stoxx Europe 600 Index dropped, with automakers leading the decline as most industry sectors headed lower. In Asia, the MSCI Asia Pacific Index climbed to a record, though markets in Tokyo remain closed until Thursday for Japanese holidays. Chinese equities led gains as property shares soared and a gauge of the nation’s manufacturing strength beat expectations. U.S. stock futures pointed to a higher open.

European bonds dropped and the euro strengthened to near a three-year high against the dollar as the region’s manufacturing activity expanded in line with estimates in December.