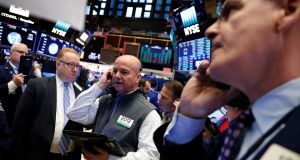 Traders on the floor of the New York Stock Exchange shortly after the opening bell on Friday. Photograph: Reuters/Lucas Jackson

European shares powered to their best week since last April on Friday, with the British and Swiss benchmarks hitting records, propelled by optimism about a strengthening regional economy and fresh new highs on Wall Street.

The pan-European STOXX 600 index was up 0.8 per cent, holding at a two-month high, while euro zone blue chips rose 1.1 per cent, also scoring its best performance since April.

Markets outside of the euro zone saw several record levels broken. Switzerland’s blue-chip SMI index rose 0.5 per cent to an all-time high, while Britain’s FTSE 100 also jumped to another record, even if its rise, 0.4 per cent, was more modest than its European peers.

“There is little impediment for continued gains whilst economic conditions that we’ve seen over the last few months continue, and there’s every reason to expect that to continue to be the case,” said Ken Odeluga, market analyst at City Index.

Dublin’s Iseq rose 47 points or 0.67 per cent to 7,174, lagging the uplift elsewhere but still putting in a positive session.

In contrast, Cairn Homes fell nearly 4 per cent to €1.92 after it reported a significant rise in its revenues for 2017 as it sold four times more housing units than in 2016. The uptick in sales was, however, undercut by a rise in margin costs. Analysts put the fall in its share value down to profit-taking by investors.

Glanbia rose by 0.3 per cent to €14.10. Shares in the food company have been under pressure following downbeat forecasts from some of its US peers. Rival Aryzta was also down marginally at €31.66 following a strong few weeks. Ryanair was also down slightly at €15.27.

Britain’s main stock index and the mid-cap benchmark scaled new peaks on Friday, lifted by a wave of gains across equities worldwide, while a sharp fall in UK car sales hit some motor dealers and insurance stocks.

Analysts have begun turning more optimistic on FTSE 100 companies’ earnings, revising up their estimates in the past two weeks as a commodities rally pushed the index higher.

Centrica and United Utilities led the leaderboard after Credit Suisse upgraded both stocks, revising up its view on the sector. Analysts at the Swiss bank said the worst case for UK domestic energy suppliers was now priced in, and the stocks carried large risk discounts.

Motor insurers were the main laggards after car sales data showed the sharpest fall in new car registrations since 2009. Admiral sank 2.9 per cent to the bottom of the FTSE.

European autos was the top-performing sector, up 1.9 per cent, while every other sector traded in positive territory. Shares in Fiat Chrysler led the index with a 6.3 per cent rise, while Peugeot and Volkswagen were among the biggest gainers, up 4.3 per cent and 2.7 per cent respectively.

Bayer was also a star performer of the day, with gains of 3.8 per cent setting it up for its strongest day since April as some analysts see its mammoth deal with Monsanto nearing closure. “The probability of deal closure in Q1 has risen in our view following press reports Bayer is exploring the sale of additional assets to satisfy EU/US regulators,” Citi analysts say.

Healthcare stocks also performed strongly, and among them Genmab shone with a 6.2 per cent rise as Jefferies wrote that the strong fundamentals of the sector should support EU biotech in 2018.

Struggling with “accounting irregularities”, South Africa’s Steinhoff jumped 6.5 per cent after it announced on Thursday its CFO would step down.

Deutsche Bank was the worst performer, losing 5.1 per cent after it said it would post a small net loss in 2017 after weak trading, a low level of client activity and the €1.5 billion negative impact of a tax overhaul in the US.

Wall Street’s main indexes extended their new year rally on Friday after weak December US jobs data raised expectations that the Federal Reserve would stick to its policy of gradual interest rate hikes in 2018.

US stocks kicked off 2018 on a strong note, carrying momentum from last year driven by a series of strong economic reports from across the globe. The S&P 500 and the Nasdaq were on track for their biggest percentage gains in more than a year on Friday, and the Dow in about a month. A more than 1 per cent rise in Microsoft, Apple and Google-parent Alphabet boosted the S&P’s technology index.

The energy index declined 0.56 per cent as oil prices pulled away from their 2015 highs on soaring US production.

Francesca’s Holdings tanked 20 per cent after the women’s apparel and accessories maker said it expected an up to 17 per cent decline in current-quarter same-store sales. Advancing issues outnumbered decliners on the NYSE by 1,435 to 1,377. On the Nasdaq, 1,497 issues rose and 1,380 fell. – Additional reporting by Reuters/Bloomberg