Gold hits near six-year high on US Fed stimulus hints 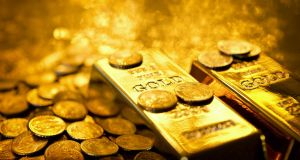 Gold jumped to a near six-year high on Friday. Photograph: iStock

Gold jumped to a near six-year high on Friday, surpassing the key $1,400 (€1,238) level before shedding some gains, but bullion was headed for its best week in more than three years on dovish signals from major central banks and rising tensions in the Middle East.

Weaker dollar, falling yields and tensions in the Middle East have lifted the precious metal by nearly 4 per cent so far this week – its biggest since the week ended April 29th, 2016, and also set for a fifth consecutive weekly rise.

“Comments from the Fed on Tuesday have had a powerful and immediate impact on the market, and we have seen gold surge,” said Mark O’Byrne, research director at Irish gold broker GoldCore.

“Concerns about the global geopolitical and economic outlook, including trade wars, have led to a robust demand for physical gold. Irish investors are recognising the fact that these global risks, as well as an increasingly bearish view of Irish-related assets including the commercial property market and indeed the Irish economy, are driving that view,” he added.

The Fed earlier this week said it was ready to battle growing global and domestic economic risks, hinting at interest rate cuts beginning as early as next month.

With the Fed possibly easing its policy soon, and other central banks such as the European Central Bank (ECB) and the Bank of Japan likely to follow in their wake, government bonds were on a bullish footing.

Since Wednesday, bullion has risen as much as $70 after Fed’s dovish comments and increased Middle East tensions.

“A global wave of monetary policy easing has the impact of pushing global bond yields lower and is a key positive driver for gold,” said Heng Koon How, head of markets strategy at Singapore’s United Overseas Bank

The dollar was set for a weekly loss against major currencies, and US benchmark 10-year Treasury yields dropped below 2 per cent for the first time in more than 2½ years.

Adding to the global anxiety were fresh worries about Middle East tensions after Iran shot down a US military drone, raising fears of a military confrontation between Tehran and Washington. – Reuters