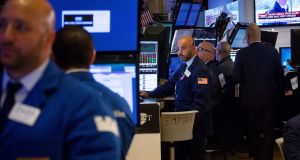 Traders on the floor of the New York Stock Exchange. US stocks fell on Monday due to Saudi tensions and worries over borrowing costs and tariffs. Photograph: Michael Nagle/Bloomberg

European shares hit their lowest level since December 2016 in early trading as trade wars, rising US yields, Brexit and the Italy/EU budget row continued to weigh on markets. But they recovered modestly to end the day up 0.1 per cent. The pan-European STOXX 600 had last week suffered its biggest drop since February. Noting that Wall Street had also managed to stage a rebound on Friday, ING analysts said the risks were still significant.

“Just as you shouldn’t breathe too big a sigh of relief after earth tremors end, we remain anxious of a market that seems jittery, even against the backdrop of a very strong US economy,” they told clients.

Domestically, the biggest headline was the slide in London-listed Irish food group Greencore, which shed almost 9 per cent of its value after announcing a shock sale of its US business.

The Iseq moved up gingerly in line with other stock indices. But Swiss-Irish food group Aryzta closed down 1 per cent at €8.35 having been off nearly 3 per cent earlier in the session. The slippage comes in the wake of calls by its largest shareholder, Cobas, for an alternative funding plan to the management’s proposed €800 million capital raise.

Bank of Ireland, meanwhile, rose nearly 1 per cent to €6.45 while rival AIB was down fractionally at €4.38. After a turbulent time last week on account of the Government’s decision to abolish the preferential VAT rate for the hospitality sector, hotel group Dalata rose 3 per cent to €5.99. Other Iseq heavyweights Ryanair and Smurfit Kappa were both down marginally at €11.37 and €28.54.

Britain’s top share index managed a modest gain on Monday as the deadlock in Brexit talks depressed domestic stocks but helped multinational exporter companies as it weakened the pound. The FTSE 100 reversed early losses to climb 0.5 per cent while the domestically focused mid-cap index fell 0.9 per cent, dragged down by profit warnings from ConvaTec and Superdry.

The FTSE outperformed the pan-European Stoxx 600 index, which rose 0.2 per cent. Oil majors BP and Shell also helped support the index as crude prices climbed. The stubborn problem of Britain’s land border with Ireland thwarted a drive to clinch a Brexit deal before a European Union summit this week, as negotiators admitted defeat after marathon talks and pressed pause for the coming days. Sterling slipped to near a one-week low.

Dublin-headquartered, London-listed Greencore, however, slumped 8.8 per cent to £1.89 after announcing it was exiting the US market. The sandwich-maker said it was selling its entire US business for $1.1 billion (£817 million) to American snacks company Hearthside Food Solutions on a cash and debt-free basis.

European shares have underperformed their American peers since the beginning of the year, and analysts believe companies that fail to meet expectations during the third-quarter earnings season will be severely punished. And early company reports on Monday indicated investors had no patience for below-par results.

Shares in the Spanish supermarket chain Dia sank 40 per cent after it issued its third profit warning in 12 months and suspended 2019 dividend payments. Swedish medical equipment company Getinge fell 18 per cent after announcing a 200.5 million kronor provision related to surgical mesh product liability claims. Among the winners was Danish food science firm Chr Hansen, up 4.3 per cent after delivering better-than-expected results and a strong outlook.

US stocks fell on Monday as an increase in tensions between Western powers and Saudi Arabia added to worries over rising borrowing costs and the impact of tariffs, following the main three indices’ biggest weekly declines in over seven months. Among the biggest drag was Apple, which fell 1.6 per cent after Goldman Sachs said there were multiple signs of rapidly slowing consumer demand in China that could affect demand for iPhones this autumn. Apple’s drop weighed on technology stocks, which fell 1.34 per cent and, much like last week, led the market lower.

The gainers among the 11 major S&P sectors were led by the defensive utilities, property and consumer staples companies. With the third-quarter earnings season entering high gear this week, Goldman’s warning on weak demand from China would only add to fears about the impact of the US-China trade war on corporate profits.